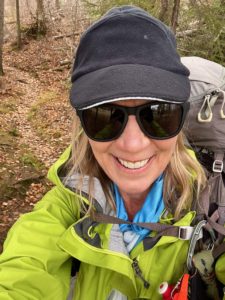 Today’s inaugural hike on the Kekekabic Trail took me 8.5 miles (13.7 km) to Howard Lake. Before I say more, a quick bit of background. The Kekekabic Trail, or Kek as it’s affectionately known, is part of the North Country Trail. It’s also one of three connecting trails in Minnesota’s Arrowhead region: the Superior Hiking Trail, Border Route Trail and Kek.

I’d thru-hiked the Superior Hiking Trail (SHT) in 2018 and the Border Route Trail (BRT) in 2019. Both are difficult, but the SHT is widely trafficked and well maintained. So while the terrain is challenging, the path itself is not.

The BRT and Kek both pass through the Boundary Waters Canoe Area Wilderness, where mechanized vehicles and even power tools aren’t allowed. Thus, maintaining the trails is immensely more challenging. To make the Kek the most challenging of the three, it also is logistically the most difficult, as it’s a three-hour shuttle from one end to the other, even though the trail is only about 40 miles (64.4 km) long.

All of this to say that I needed to wait to tackle the Kek until it was reasonably trimmed back, the season was right (no ticks or summer heat/humidity/mosquitoes/flies) and I had a shuttle.

Making My Way to Howard Lake

Everything coalesced for this hike at the last minute this fall. So I drove up to Silver Bay last night, then on to Ely this morning. I parked my car at the ranger station and met my shuttler, Kurt Erickson. We had a great visit on the 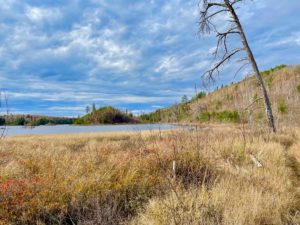 ride over, as Kurt was a police officer for 30 years, volunteered for the St. Louis County Search and Rescue and has lived or frequented the Ely area for decades. So lots to chat about.

One of the things Kurt pointed out is that this area of Minnesota features the Laurentian Divide, which is a three-way continental divide. The waters here go either to the Atlantic, Gulf of Mexico or Hudson Bay. Pretty cool. Kurt deposited me at the eastern terminus around noon, and soon I was off.

With only a few hours before dark, I wasn’t sure where I’d camp. The Howard Lake campsite was about 8.5 miles (13.7 km) in, the Gabimichigami Lake campsite 10 (16.1 km) and the popular Agamok Bridge about 12.5 (20.1 km). One hiker whose trail journal I read online rated Howard and Gabimichigami Lakes as the only bad campsites, so I was hoping to make it to Agamok. But I quickly knew that was not likely.

I knew from the Kek Facebook page and other research that the eastern end of the trail is rocky, rooty and hilly. The western end, in contrast, is supposedly relatively flat and easy. But everyone’s definition of difficult/easy, 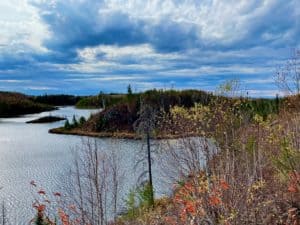 flat/hilly, etc. differs. I was hoping to hike 2.5 mph (4 kph), but those plans were immediately dashed. I didn’t find the hills too difficult at all. But the rocks were another story.

There were many sections where I had to pick my way across a field of small boulders. In other parts, I just couldn’t walk briskly because there were so many rocks and roots, many of which were hidden by the downed leaves. While the trail was generally easy to see, there were some spots where I had to pay close attention, because side trails led to portages for the canoers. And since this trail isn’t super popular, especially at the end of October, there wasn’t a lot of prior foot traffic to keep the vegetation at bay.

FYI: I did run into one other person, who was heading in the opposite direction. But that was it.

I was also slowed by my backpack. Specifically, the bear vault I was carrying. I’ve never hiked with one before, but one of the major websites (maybe the NPS?) said to use a bear vault here instead of a bear bag. Well, I didn’t have it in the greatest spot within my pack, so it was painfully pressing into my lower back and right hip.

After a few hours at a slow pace, I knew Agamok Bridge wasn’t happening. I still hoped for Gabimichigami Lake, but the last few miles leading to Howard 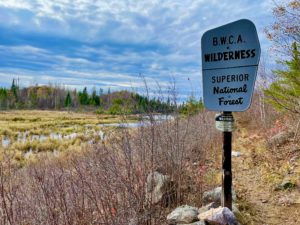 Lake were very rocky. The trail also passed through a lot of very tough brush that kept snagging my trekking poles. I was going at a snail’s pace and did not want to be on this terrain in the dark.

So when I reached Howard Lake at 5 p.m., I stopped. It’s not a great campsite in that there’s no real flat spot for my tent. It’s also tiny; just one slanted spot on one side of the trail, then a grill and some logs near the lake on the other side of the trail. But that’s fine. I got my tent up, ate, cleaned up and am already in my tent (it’s 7 p.m.). It was a gray, cool day, and it’s supposed to be about 35 F (1.7 C) tonight. The sun doesn’t rise until 7 a.m., either.

Hopefully I’ll stay warm tonight and I can rearrange my backpack contents tomorrow to get that bear vault off my lower back/hip. I’m preparing for another challenging day tomorrow, before two easier ones to finish up this short hike.

Need a bear vault? Here’s the one I use.
I also like these Black Diamond trekking poles.