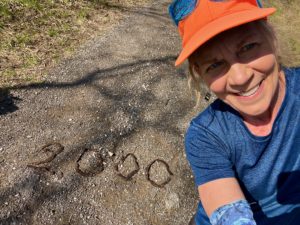 Today’s hike to Defiance Reservoir was quite enjoyable. I drove to Napoleon’s Ritter Park, where I ended yesterday, parked my car and started to hike. It was already warm (60s F / 15.6-18.3 C) and the day was sunny, so I was pretty excited. I’ve hiked in so much cloudy and rainy weather lately.

After just a mile (1.2 km) or so, I missed a turn to a semi-circular piece of trail that led past a park with restrooms and water. I stayed heading south on the road, paralleling the Maumee River, and discovered my error when I saw blazes for the trail’s return to the road. I was confused at first, and started hiking backwards on that semi-circular path, but soon realized my error and headed back to the river.

Not too long after that, I hit a milestone – 2,000 miles of the NCT done! I started my section-hike in June 2017 in Grand Marais, Mich. At first I completed odd bits of trail, but eventually stitched them together so that I’ve gotten as far west as Ely, Minn., and as far east as what I’m doing right now.

Making My Way to Defiance Reservoir 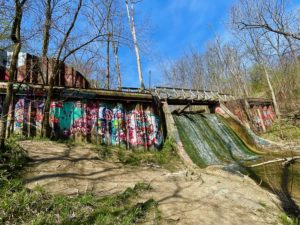 The spring wildflowers are starting to bloom, although I think I’m at least a week away from their fully glory. After following the river, the trail began crossing farmland. At one point, the trail crossed a bridge over a dam, which was covered in graffiti. I don’t condone that, but it was colorful and rather attractive.

I ran into Heather and her companion (blanking on his name), two hikers that John was also shuttling. We chatted a bit, and I continued southbound. The next major spot was Independence Dam State Park. This park is several miles long and narrow, paralleling the river. Since it’s Saturday and the weather is great, it was pretty full of people. There were a notable number of motorcyclists out today, too.

Once out of the park, it was pretty much all road walking, with a little pavement, to Defiance and the reservoir, where I’m camping tonight. 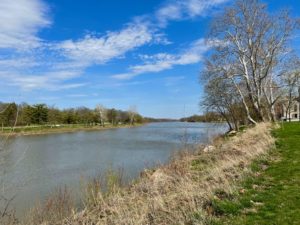 Fun Along the Way

En route to the reservoir, I passed a lot of plaques with interesting information about the War of 1812, as apparently a lot of the battles were in this area. There is also some info about Johnny Appleseed, whose first tree was planted here. The things you learn when hiking!

Oh – and I forgot to mention I passed an old, abandoned outhouse clinging to the edge of the towpath at one point. This is one of the things I love about hiking – the random things you discover. Also, the great people you meet. While hiking through Defiance, a woman called out to me from her home. She lives on a corner where the trail makes a turn, and when she and her husband realized this, and what the NCT is, they became huge fans. We chatted a bit, and she took my photo with her hubby and a neighbor.

John met me before the reservoir, and gave me a nice, cold bottle of water. That was fantastic, as by this time all of my water was warm, and verging on hot. I reached the reservoir about 30 minutes later, and he shuttled me back to my car in Napoleon – only after we stopped for an amazing soft-serve ice cream cone at local hotspot Eric’s. 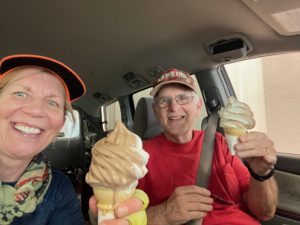 Driving back to Defiance, I stopped at the Davises, the couple I mentioned above. They were intrigued that I’d written a book about my thru-hike of the Ice Age Trail, and wanted a copy. So I dropped one off before heading to the reservoir.

There are two gazebos with picnic tables in the area designated for camping. Porta-potties are a little bit farther away. The choice was whether to camp in the grass, which was long, wet and rather muddy, or camp in one of the spacious gazebos, which have not only picnic tables, but electric outlets. The negative: the gazebos have one light that’s on all night.

I elected the gazebos. Ticks are coming out, so the grass didn’t seem like a great option (not to mention the mud and long grass). Since my car is here, I brought out two blankets and covered my tent. This will block out much of the light.

Today’s most valuable gear: Since it’s going to be in the 80s F the next two days (26-29 C), I’ve got my favorite Coppertone Sport spray sunscreen and have plenty of Body Glide to rub all over my feet to prevent blisters.