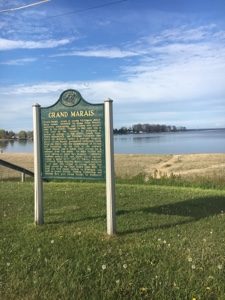 And so our section-hike of the North Country Trail (NCT) begins, here in Grand Marais! This is Grand Marais, Michigan. It’s a little confusing, because there’s another Grand Marais in Minnesota that’s also part of the North Country Trail (and the Superior Hiking Trail). Even more confusing, I know. But many National Scenic Trails piggyback on existing trails, as is the case with the Superior Hiking Trail also being part of the NCT. But I digress!

So, Ed and I drove up to Grand Marais today in two cars. We did this so we could shuttle ourselves on/off the trail. There are some trail angels up here, and a shuttle service, but the U.P. is a large area. And nothing was working out for us to come with just one car.

Part of the reason is that cell service is often nonexistent here, and it’s next to impossible to set up or confirm any shuttle arrangements if you can’t reach people. But no big deal to have two cars, really. If we shuttle ourselves, we’re in control of our schedule.

Heading Out of Grand Marais 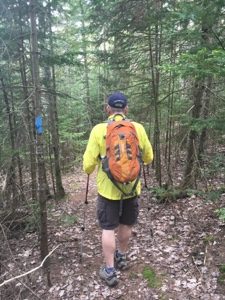 Since it took six hours to get here, and then the time zone flipped from Central to Eastern and we lost another hour, we weren’t able to start hiking until about 4:30. All we had planned was an easy four-miler (6.4 km) from a spot just east of Grand Marais back into town. Most of this hike was on the road. Thankfully, since it was a little-traveled road, it was pleasant.

Grand Marais is quite small, but it has a beautiful beach and cove. According to signage, “Marais” means refuge (it’s French, from the early explorers), and that’s just what the cove looked like. That night we had great whitefish tacos at a little brew pub. It was graduation day; three kids graduated from the local high school, including twins. We stayed at Hilltop Cabins.