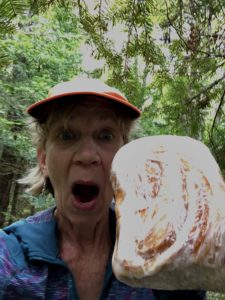 So, today’s itinerary seemed pretty manageable: hiking from Gardner to Laird Road, about 17 miles (27.4 km). I’d had a good night’s sleep last night, although it was a bit warm and totally quiet. It was kind of weird. There wasn’t any wind or anything. Well, I did hear a few birds, but really not much.

I’m not used to the sun setting at 9 p.m. and then not rising until 7 a.m. or so! Once again I was up in the dark, eating breakfast, getting dressed and packing up. I met trail angel Byron Sailor at Plains Road, where we dropped my car. Then, he shuttled me back to Gardner Road. Byron gave me a ginormous cinnamon roll – really a loaf of cinnamon bread – from the Hilltop Bakery in L’Anse. It’s their specialty. What a sweetie!

Byron brought along his ATV and was going to hiking the same initial mileage as me. Of course I started off earlier, since he had to drop his ATV at his ending point. Well, we ended up meeting not too long afterwards because I missed a detour that occurred almost immediately after crossing Gardner Road. That cost me an extra =1.2 miles (2 km) at the start of the day. Rats. Byron decided to look for the detour, while I walked around on the roads.

I’d heard there was another bad beaver dam – which one is the “really bad one” I keep hearing about on Facebook?! – and found one a few miles in. But it was easy to get over. Phew! The path became cedar swamp for a while, with lots of soggy spots, exposed roots, etc. There was some scruffy vegetation.

Disclosure: This post may contain affiliate links (among regular links) to products I own and like, or which I think you might like. This means that, at no extra cost to you, I will earn a commission if you click through and make a purchase.

I ran into two guys who were hiking in to fish, and they told me the trail was flooded up ahead because of a beaver dam. Oh, no! Is this the one I’d been hearing about for days? The guys said I could walk across the beaver dam, which was about 40 yards (37 m) to the right of the trail. 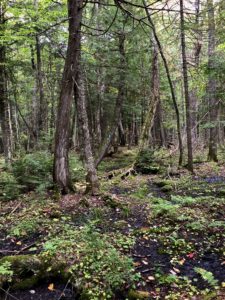 Well, I got to the spot the guys were talking about, and flooded is an understatement. There was water everywhere! I bushwhacked quite a bit to the right, but never found the beaver dam. I put on my water shoes and decided to wade across; the guys said it was about knee deep. Uh, no! After two steps, I was in up to my thighs and realized it was probably waist deep or worse up ahead. I couldn’t wade through that with a backpack full of electronics, not to mention my sleeping quilt and clothes.

I went back to the trail and began calling out Byron’s name. He would still be on the trail; his ATV was about a mile ahead at the next intersection. Whaddya know, after yelling his name a few times, he suddenly appeared on the trail!

Byron used to be a forester, so I figured he could find the dam easier than I could. Yep! He found it almost immediately. I was looking for a huge dam with lots of logs and sticks, but this one was mostly earthen, small and had water running over it. There was a huge tree bent over the start; I don’t think I could have gotten over it (with my huge pack) without Byron’s help. (Rats! In the worry about finding and crossing the beaver dam, I neglected to get photos!) 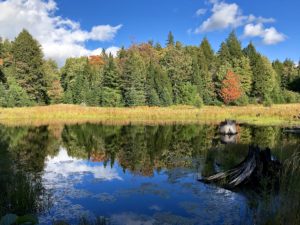 Byron and I parted ways when we hit the road where his ATV was parked. I had about +6 miles (10 km) left to go to the area I’d targeted to camp. The trail was decent, although the hills started getting to me, even though they were nowhere near as steep as the Trap Hills.

I’d hoped to camp near Wiggle Creek, which was near a trailhead, and maybe should have. There were some nice spots, but the creek was pretty low and I figured I’d hike another 1-2 miles further (2-3 km) to shorten my day tomorrow. Well, I did find a reasonably nice campsite under some pine trees. But not as nice as the spots by the creek. Plus, I never found where Wiggle Creek continued (it should have been right near the trail where I pitched my tent, but there’s nothing). Curiously, the Avanza maps also show me off the trail, but I’m definitely following blue blazes. I hope I’m not going astray!

Looking for good water shoes, which double as great camp shoes? I love my Vivobarefoots. Get some here!