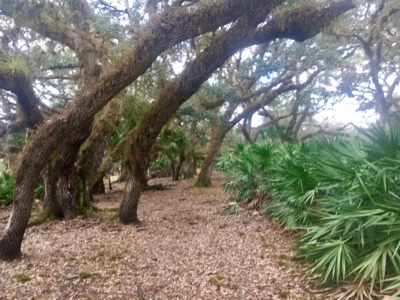 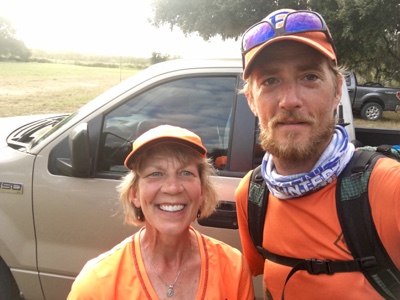 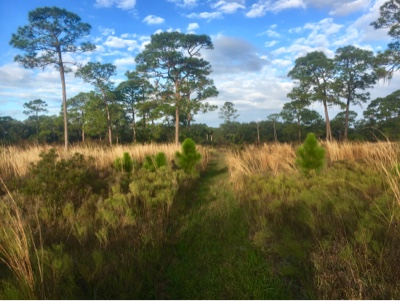 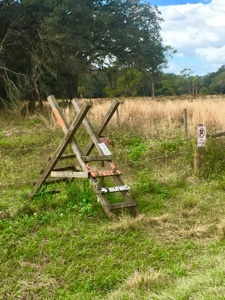 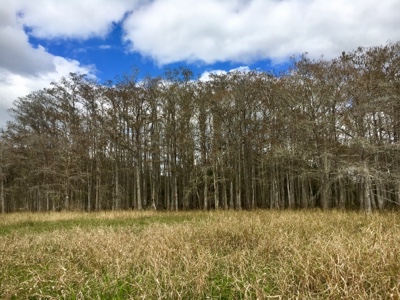 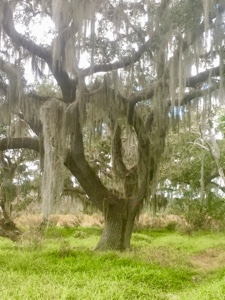 Today’s destination is Starvation Slough. But poor Moon Shadow! Her knee just isn’t healing well, so she’s decided to go to her sister’s house for a few weeks and rejoin her hiking partner, Barb (aka Late Start), at a further date. For today, anyway, she’s still here and shuttling me.

So, today she drove me back to Platts Bluff Boat Launch, which is really a pretty little trail. Finally – FINALLY! – I had some great hiking. My inaugural hike through Big Cypress Swamp was wonderful, but I’ve been on levees and road walks for days now. The levees are pretty, but pretty much all the same. And road walks are never the best. So today was beautiful trails.

The first section was through some gorgeous woods. Well, I’m not sure what the term is down here, as they weren’t really woods but a combination of trees and south Florida vegetation. But it was all beautiful. And there was something very fragrant – wild dill? – that made everything even lovelier.

The next trail section took me through a cattle pasture. There are loads of cattle farms down here, by the way. Sort of makes me think of Texas. The pasture wasn’t a typical open, flat pasture as you’d see back home in Wisconsin, but a field of trees and vegetation. So you couldn’t see the boundaries or across the pasture or even where the cattle were. You just had to follow the blazes with one eye and watch out for cow pies with the other. It was sort of like trying to pat your head and rub your stomach at the same time.

Had a short road walk after that, then crossed a stile with a note saying that if there was high water in the Kissimmee River, hikers should take the road. Well, how do you know if there’s high water in the river if you can’t see it yet?! Actually, I did know it was totally dry from someone’s FB post. So I crossed over the stile and spent several miles walking through various landscapes, from forest to field to more cattle pasture. At the end, Mike Gormley had left several gallon jugs of water for hikers. He is just the nicest guy.

The day ended with 10 miles of road walking. Not too fun, but at least no one was on the roads. With just a few miles left I ran into Duck, another hiker. He said I was the first hiker he’d seen since he left Big Cypress Jan. 6. Wow. We both were wearing blaze orange shirts and hats, which was funny. He said some guy had pulled over and told him that his hiking partner was a little ways behind. He didn’t know what that meant, but when he saw me he figured the guy must have thought we were partners because we were dressed alike.

Oh – some people were worried about me hiking down here due to the “dangerous folks” in Florida. Today, four men in pick-up trucks stopped. The first man saw me being threatened by a dog and offered to drive me up the road. I declined, but when the dog started coming after me again he drove his truck at it, beeping, and didn’t leave until I was safely far away. How kind! The next guy commended me on my hike, and the final two offered me water. Most people are good people.

Tonight Moon Shadow and I drove back south of Okeechobee to pick up Late Start, her hiking partner. Then I settled in my motel room and watched the Pack beat the Cowboys. YES!