Tips for Hiking the Florida Trail 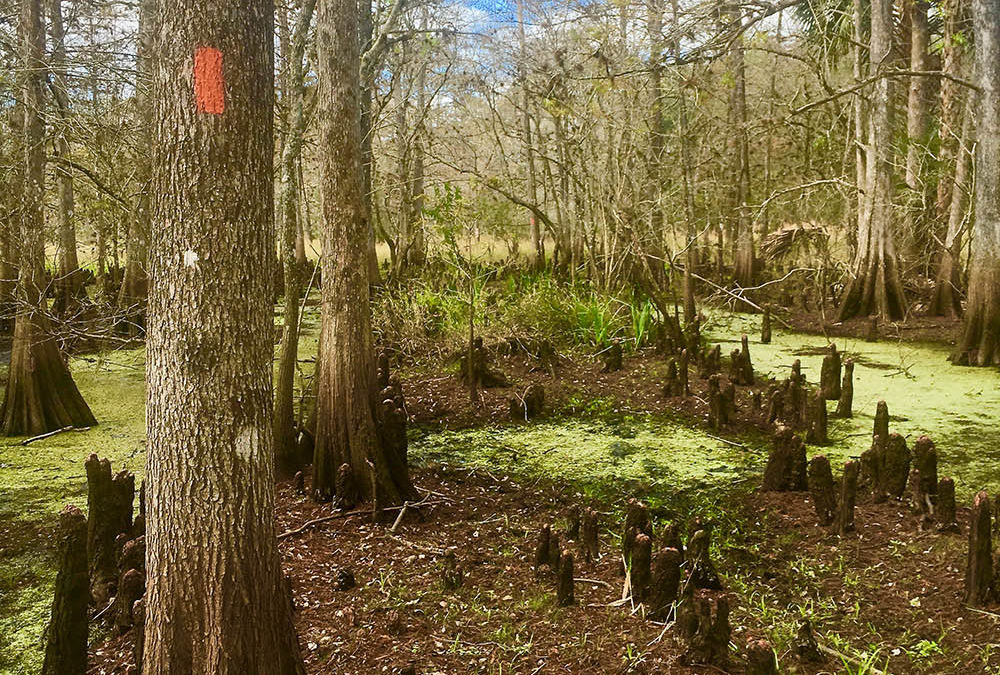 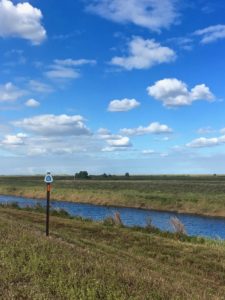 The Florida Trail, or FT, is one of our 11 National Scenic Trails. Experienced hikers sometimes are wary about tackling this trail, believing that any path running along mostly flat terrain isn’t worth hiking. But once they hike the whole thing, they typically change their minds.

While it’s true the FT isn’t monstrously difficult, it certainly features some challenging terrain. I completed the entire trail in 2017, hiking it during four separate trips. This is technically still a thru-hike, since I completed it within one year. Here is some info to get you started planning your Florida adventure.

The Florida Trail is 1,200 to 1,400 miles long and stretches from Big Cypress National Preserve in the south to Fort Pickens in the western panhandle. It is one of three National Scenic Trails that are entirely in one state. (The others are the Arizona Trail and the Ice Age Trail.)

A hike on the FT will take you through swampland, along white-sugar beaches, past sugar cane fields and through forested woodlands. There are black bear here, along with alligators, poisonous snakes, the Florida panther and wild boar.

Various materials say the FT is “1,200 to 1,400 miles.” That’s because it features several alternate routes. So depending upon which route you take, your mileage will vary. One route choice you will make is where the trail hits Lake Okeechobee. You can hike around the lake via an eastern or western path. The eastern route is 55.6 miles, while the western is 56.

A second split comes near Orlando. Here, the eastern corridor (149.1 miles) takes you near Orlando and up to Ocala, one of the oldest parts 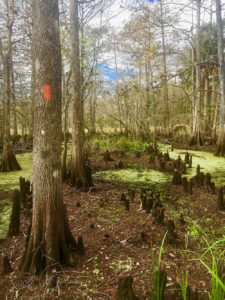 of the FT. The western corridor (241.4 miles) takes you through the Green Swamp and Withlacoochee State Forest, both of which are hiker favorites.

The final split comes near the northern terminus, in Eglin Air Force Base. The traditional northern terminus is in Fort Pickens to the west. But you may also hike north at the Blackwater intersection to the Blackwater terminus at the Alabama state line. (If you continue on into Alabama, you’ll be on the Alabama Hiking Trail and the greater Eastern Continental Trail.)

There is also an Ocean-to-Lake trail spur that connects Lake Okeechobee with the Atlantic Ocean, and a path from Big Cypress National Preserve to Key West, part of the Eastern Continental Trail that links Key West with Cape Gaspé in Canada.

Due to the heat, humidity and bugs, hiking season is late October through April. January is a popular time to start a thru-hike, and often there will be a thru-hikers’ kick-off weekend in Big Cypress Swamp. Volunteers offer shuttles, food and other assistance.

It’s easy to get on and off the Florida Trail, as it passes through or near so many cities and towns. If you want to start at the southern terminus, it’s conveniently located at the Oasis Visitor Center in Big Cypress National Preserve. Hikers often fly into Miami (east) or Naples (west); the trip takes about an hour from both locales.

The northern terminus is at Fort Pickens in Pensacola Beach, about 75 minutes from Pensacola International Airport.

The FT blaze color is orange. Both its trail segments and connecting road routes are marked. Spur trails to parking areas and campsites are generally blazed in blue. 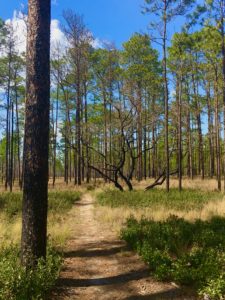 There are only a handful of camping shelters along the Florida Trail. The trail does offer some campsites, but not on a regularly spaced basis. On some public lands you can camp wherever you’d like; on others, during hunting seasons, you can only use designated campsites. Most hikers camp along the canals in the southern section. It’s a mixed bag, and you’ll have to plan ahead.

Since Florida is a humid place and rain is frequent, some campers prefer using hammocks rather than tents. If you like that idea, just remember that you can’t hang a hammock on the canals.

Resupplying is generally not a problem. The trail passes through and near many towns, and the trail angel network is pretty robust.

Florida has a lot of water. But it’s not necessarily what you’re used to. When traversing Big Cypress Swamp, you’ll need to get your water from cypress domes or stands. In some areas, all you’ve got are canals and ditches. Tannic water (brown-colored) is common in Florida; it picks up the color as it passes over oak leaves or pine needles. Filtering doesn’t remove the color, but it tastes fine. Always treat all water unless it’s labeled potable.

There are two major swamp crossings on the Florida Trail. One is at the southern terminus: a 30-mile crossing of Big Cypress Swamp. Most people take two to three days to hike this section, which features wading through water that’s anywhere from ankle-deep to thigh-deep. Plan to average about one mile per hour here, and it’s best to hike with at least one other person. There are five campsites in the swamp.

The second crossing is in the northwestern section at Bradwell Bay, a hardwood swamp in the Apalachicola National Forest. Hikers typically face seven miles of water that’s knee- to waist-deep, although when I passed through in the fall of 2017, I only had to make it through one small section of mud. The mud was like quicksand, however, and I was alone. Hikers are strongly recommended to hike with others. Always call the USDA Forest Service ahead of time to find out the water level (850-926-3521).

The Florida Trail Alliance sells maps, clothing and more on its website. There is also an Atlas Guides app available, which is invaluable. If 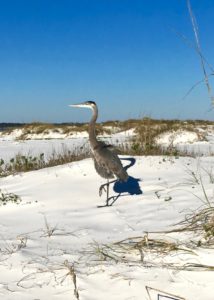 you’re a paper map geek like me, be aware that the maps aren’t as up-to-date as the app. I suffered through a road walk instead of a new, lovely trail section because I was looking at my paper map that day, not the app.

The Florida Trail is managed, protected and maintained by the Florida Trail Alliance (FTA) and a wealth of volunteers. If you’re thru-hiking the trail, membership in the FTA is required. It’s always nice to give back and join a trail association when you’re hiking its trail. The cost is minimal, and the money is always put to good use.

The Florida Trail is unique in that you need a wealth of permits for a thru-hike.

Before your hike, do this:

During your hike, do this: 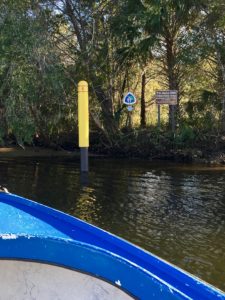 When you reach St. Marks Wilderness in the panhandle, the trail ends at the St. Marks River and picks up on the other side. You can try hailing a passing boat for a (free) ride across, or arrange transportation with Shell Island Fish Camp. In 2017, I paid $25 for the (very short) ride. If you stay at Shell Island Fish Camp, the boat ride may be discounted or free.

Two Don’t-Miss Spots Along the Trail

Billie Safari Swamp. Many hikers elect to spend a night here in a chickee, which is a traditional Seminole thatched-roof dwelling. The place also offers air-boat rides (I highly recommend taking one), bathrooms, a restaurant, animal shows and more.

The 88 Store. This tiny store, seemingly in the middle of the woods but officially in Salt Springs, is a favorite spot with hikers. There’s free coffee in the morning and cold beer in the afternoon. Ice cream, too! Ask for the trail register at the bar.