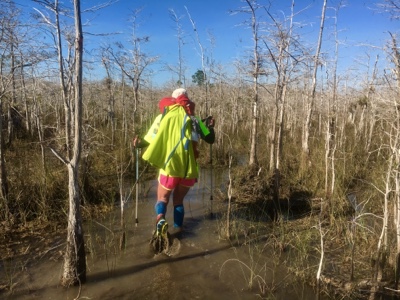 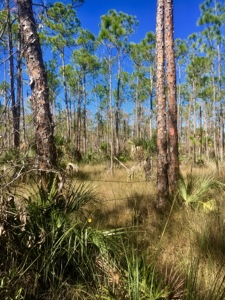 Today our goal was to reach either Oak Hill Camp or Ivy Camp. But to achieve that goal, I needed coffee in the morning. But I wasn’t hiking with a camping stove.

However, before arriving in Florida, a bunch of us had been communicating through the Florida Trail Class of 2017 Facebook page. I’d made a deal with a hiker named Beerman – also a writer – that if he gave me coffee each morning, I’d drop some water for him on a subsequent stretch of canal, where there’s no water to be found (filtering the canal water isn’t so great). So Beerman had coffee for me on this frigid morning, which is all I needed. Soon our little troop was up and off.

We hiked several miles this morning amid beautiful scenery. The weather was warm, but pleasant. However, my pack was pulling on my shoulders so much I wasn’t sure how much longer I could hike. And I’m pretty tough. Eagle Eye said to tighten my waist straps, which would put more of the load on my lower back so it wasn’t all hanging from my shoulders. Voila, the weight totally shifted and it was great. Clearly, I’m a rookie at this.

We had learned from previous hikers that the swamp starts around mile 21. (It differs a bit annually depending on how much rain the area gets in the summer/fall.) Right before we got there, Boxcar saw a cottonmouth, which is a poisonous snake. Yikes! I saw the end of it. Pyrite jabbed at it a bit and I screamed. Why would you annoy a poisonous snake?! But the guys just wanted to see it. Boys!

Then the swamp began. For starters, the water is incredible clear, as all the vegetation filters it. It’s not some scummy, fetid place. But you’re walking through water that’s anywhere from ankle- to knee-deep, so it’s slow going. Plus there are these holes that you can sink into. So maybe you’re walking in ankle-deep water for 10 minutes, but then one leg sinks down to your thigh. You have to move slowly and carefully. Most hikers go 1 mile per hour. Our group was averaging 45 minutes/mile.

For weeks before I came, I worried about the alligators and poisonous snakes in the swamp. But here’s the thing – the trail is very narrow for the most part, so you really can’t picture a gator swimming down it. And you’re concentrating so hard on keeping your balance and where you’re stepping that you really aren’t thinking about snakes and gators. Which is a good thing! So all of those fears I had beforehand were for naught.

We had hoped to make it to Ivy Camp, but only got to Oak Hill Camp. Oak Hill is a small camp, and about eight of us camped there at night. We filtered our water right from the swamp we were walking in! (It tasted fine.) It wasn’t as cold as last night, but it still was cold for my hammock. I didn’t get too much sleep again tonight.