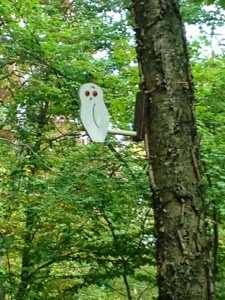 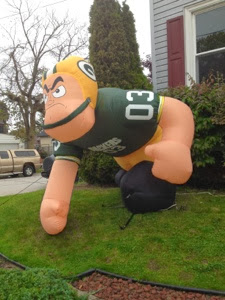 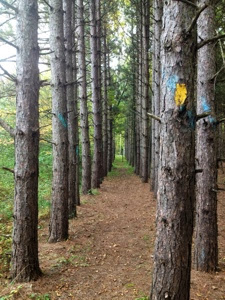 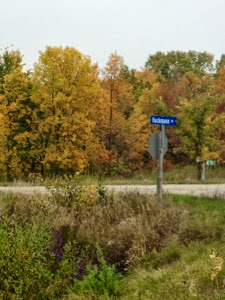 Today, en route to Point Beach, they were predicting a 50 percent chance of rain all day. So I figured I’d get sprinkled on at some point. But my luck held out. It sprinkled as Mom and Dad drove me to the spot where I’d stopped last night. This was in front of a farm in the middle of a connecting route. But once we arrived, it stopped completely.

When I got out of the car, a German Shepherd came bounding across the road, barking, but we knew he was friendly. The farmer was there in an instant, too. The farmer said he’d noticed us stopping there last night, but of course had no idea what we were doing, or that his farm was along an IAT connecting route.

Anyway, I was surprised to see several cranes in his field, which were quite impressive. And speaking of cranes, I’m amazed at how they’re everywhere in the state, at least at this time of year. I’ve seen more cranes than just about any other form of wildlife, it seems. They’re so prehistoric looking and sounding.

So I’m doing about 13 miles (21 km) on the roads, when I come upon Mom and Dad in yet another farmer’s driveway. They had pulled over so they could supply me with more water and food. While waiting, they were chatting up the farming couple, explaining what I was doing.

So the couple began cheering me on as I ran by. It was so cute. Then I noticed a herd of elk across the way, so I stopped and jogged back up to them. They said the elk had just been bugling, and the guy ran down the road with me a bit to see if they’d bugle again. They did, and it was such an incredible sound – rather prehistoric again. Just like, perhaps, the sound a wooly mammoth made during the Ice Age.

When I was ready to continue, I asked the guy if he’d bring my camera, and a piece of trash from an energy waffle I’d eaten, back to my parents. He said sure, so I yelled to the woman that I was making her husband a temporary crew member. She started pumping her arms in the air, saying, “We’re a part of this too, now! We’re Dave and Margie by the elk!” It was pretty cute.

Manitowoc was an interesting experience. I entered the city with no blazes guiding me. But I made my way to Schuette Park, where the trail was supposed to run along the river. I couldn’t see any signage or blazes in the park, so I asked one of the city employees who was mowing the area. He said he knew nothing of the IAT or blazes, and that a small path led down to the river, but they didn’t do any maintenance down there.

I started following the path, but it was so overgrown and tiny that I was walking bent over double. When it took a steep downturn, and I saw downed trees everywhere, I decided it wasn’t wise to follow this path. Trouble was, Manitowoc is cut by the river. So most of the streets don’t go through. I probably walked a mile or two extra (2-3 km) to get around and back to a spot where I could hook up with the trail. I didn’t see one blaze on the official path until I crossed the river and hit Revere Avenue, when suddenly the route was perfectly blazed. Weird.

Although it was cloudy out, it was humid and still warm, so I was sweating up a storm. Luckily, the path then ran along the lakeshore, where the temps dropped 10 degrees and I was finally – finally – not sweltering.

The Dunes segment was pretty, running through forest and fields, although some spots were overgrown. I saw lots of tiny, white, wooden owls attached to various trees. No idea what they were for until I spoke with the chapter coordinator tonight who said tiny saw whet owls migrate through the Dunes every spring and fall, and the owls are banded and tracked. This is the season, I guess. Still not exactly sure why they tie wooden owls up there …

Two Rivers was well blazed, and the segment ended with another lovely stretch along the cool lakeshore. Then it was into Point Beach State Forest. I’d discovered this park last year on a story assignment, and loved what I’d seen. Now I got to run on the trails.

The first two miles (3 km) were right on the beach. It was a bit difficult, because the easiest walking was where the sand was packed down, near the water, but that area was slanted. So I had to walk on a slant for two miles (3 km). Hiker notes said it’s very easy to miss the sign directing you off the beach and back into the woods, so I was staring at the woods for the last mile (1.5 km) so I wouldn’t miss it. I did see it, but I’m sure I would have missed it if I hadn’t been staring to my left for 20 minutes. The trails here were soft sand and dirt, and quite runnable. It was a great way to end the day.

Have to mention more great B&Bs. I’ve had such wonderful experiences on this trip. Last night was a stay at the Jay Lee Inn in Elkhart Lake, very close to the La Budde segment. Great, comfy digs and one of the friendliest innkeepers you’ll find.

Tonight is the luxe Westport B&B in Manitowoc. This place has everything from fine, local Beerntsen’s chocolates to an enormous whirlpool tub to the softest robes you’ll find.