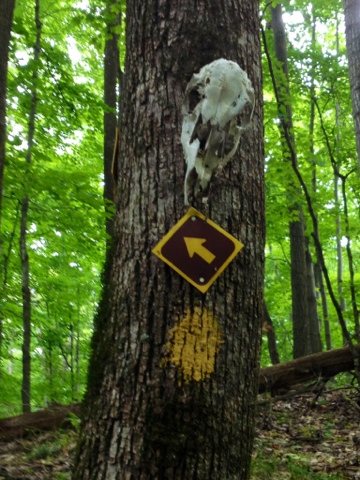 Little did I know at the start of the day that my final segment, Bear Lake, would be a doozy. I’ll have to be somewhat brief, though, because I’m using my phone again to make this entry.

So, I started my day with first ATV ride. I started hiking in Timberland Hills, when I was confused by the blazes and couldn’t figure out which way to go. I was in this very open area, walking around in circles trying to find the next blaze. Luckily, I spotted an employee – Timberland Hills is a ski area – and he helped me out. He got his ATV, told me to jump in, and drove me to the next blaze. It wasn’t far away, but it was hard to spot.

While hiking down the hills in Timberland Hills, the knee I bashed on the rock yesterday in McKenzie Creek started giving me problems. That’s not a good sign! It didn’t hurt hiking up the hills, but it sure hurt hiking down them. And I really couldn’t run, which is frustrating, as I’m trying to do a run-walk and set the women’s fast-packing record.

My next segment was Grassy Lake. Hikers, beware of this one. Part of Grassy Lake was great (well blazed and mowed), but portions were very overgrown and rough.

So, Ed was hiking in to meet me on this one. When he met me, he stooped and picked up a huge stick laying near me. I was puzzled. Then he explained that he’d just passed a black bear a few yards back, and it was so close he saw it blink. Yikes! Because I was hiking forward, the bear might still be back there! We paused a few minutes, hoping to give it time to leave. As we started hiking again we talked loudly to help scare it off. Luckily, it was gone.

When I got to Bear Lake, I was initially excited. It was my final segment, and the first mile was a “barely there” trail winding through the woods. It kept twisting and turning and all I could think of was how fun it would be as a kid to be running along this trail. Heck, it was fun now!

But then the blazes sent me in circles – and then stopped. I had no idea what to do. This trail was supposed to end up in a Boy Scout camp. I found a red blaze and started following that, figuring it was a Boy Scout trail and would take me to the same spot in the end. But there was just that one red blaze. Nothing else.

I admit, I began panicking. I called Ed and asked him to pick me up on the same highway where he’d dropped me off. According to the map, I was only about a half-mile in from the road, so I could bushwhack back out. But after a few minutes of that, I came to a steep drop-off. Now what?!

Just when I feared I’d be stuck here all night, I somehow stumbled upon a logging road, which led to the highway, and Ed. So I never reached Camp Phillips, the Boy Scout camp. But I tried my hardest. What will tomorrow bring?!

P. S. I love the fun some people have with trail markers (see photo). Oh, and tonight we’re staying at Cobblestone Bed and Breakfast in Birchwood. It’s very nice.