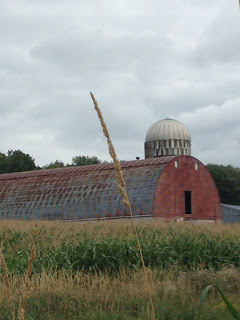 First, let me recap yesterday. Day 1 was hot, with temps reaching the 90s. I set out at 6:19 a.m. to beat the heat, or at least try. I only succeeded in beating it for a few hours.

The segment through St. Croix Falls was pleasant. Saw several deer and enjoyed dipping in and out of the trails that wind through town. Things began heating up while on the Gandy Dancer. My sister-in-law, Laurie Weaver, drove over from Minnesota to help crew so Ed could join me on the trail. (THANKS!) She was able to find a bunch of geocaches while waiting for us, which she enjoyed. She also joined us for part of one segment.

Thanks to the Westigards, Trail Angels who left me a cooler filled with snacks, cold water and one of the best homemade wraps I’ve tasted. Not only did I get to enjoy “trail magic” on my first day, but they’d read this blog and addressed me as Valderi. 🙂

The day ended with an ice cold Gandy Dancer stout in hand and 32 miles in the bank.

Today was a bit harder. First, it was Day 2, so I was sore from Day 1. But mostly it was difficult because the trails I tackled today were quite overgrown, save for the first one, Straight Lake, which was quite enjoyable. Because of the thick vegetation, it was often difficult to walk, let alone run. Sometimes you couldn’t even see the trail, it was so overgrown. For those heading this way, McKenzie Creek is especially overgrown and full of downed trees, in addition to being hilly. There’s also a difficult section with wild raspberries near the creek; they sliced me up all over, and their winding vines that lay on the trail floor tripped me several times.

Still, it was a good day. It was cloudy and cool, if a bit humid. I saw many beautiful sights, plus turkeys, swans and other wildlife. Thanks again to the Westigards; Gregg shuttled our car a few segments up so Ed could spend the morning with me.

Oh, can’t forget to mention we’ve been staying at a lovely B&B the last two nights: Canyon Road Inn. It’s in Turtle Lake, relatively convenient to the trail. The rooms are great, namely the comfy beds and whirlpool, which we’re using for post-run ice baths. And hosts Patti and Turner are very accommodating to hikers. They’ve already left us “to-go” cups for our coffee tomorrow morning, since we’ll be up and out so early.