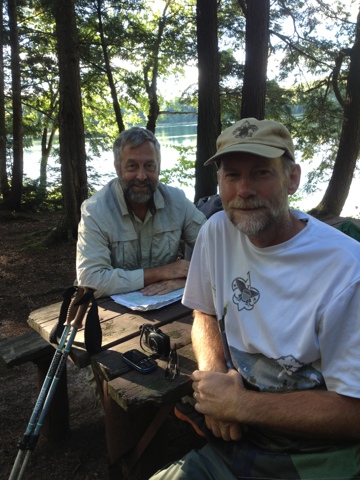 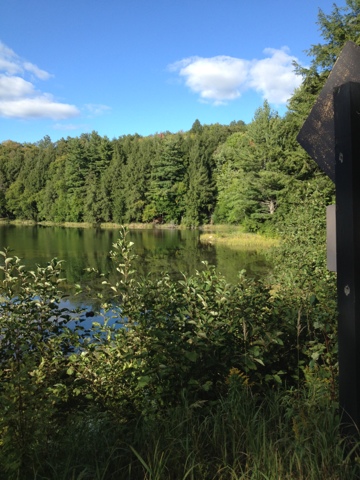 Today’s destination is Highland Lakes West. The day started off a little sadly because I had to bid adieu to Maura. She was a great crew member. She got me to my first segment (the end of Harrison Hills), dropped some water for me in Parrish Hills, then headed home. Soon she’ll be in NYC for her United Nations job.

So my friend Doug was scheduled to arrive about 6 p.m. tonight and take over crewing. But I was alone for the bulk of the day, and this is when I entered Langlade County. The infamous Langlade County. People say the trails here aren’t marked well and are overgrown.

I started Parrish Hills skirting around the first part via some gravel roads, per chapter chair Joe’s recommendation. He advised this since there’s a creek crossing and lots of wet spots in the western end. With my blisters still healing, my cellulitis and having no crew support today, it wouldn’t be good to have wet feet all day.

After that slight detour I started in on the real trail. And all was going well for the first mile – until I passed a little lake and popped out into a large clearing. The arrow pointed me straight ahead – east, the way I needed to go – but I couldn’t find any arrows or markings across the meadow back into the woods. Heck, I couldn’t even find any path into the woods.

What to do? Retrace my steps and take a really long detour? Not a good option. I spied a service road to the north of the clearing and decided to follow that. Apparently a lot of eastbound hikers must do this, because after about a half-mile or so (1 km) I found a marker saying the Ice Age Trail was up ahead. When I got to the trail, it was the spot where I would have come out of the woods across that clearing, if I could have figured out how to get into it.

So now the question was whether to get back on the trail. This spot was where Joe told me there were signage issues because storms had knocked down a lot of trees with blazes. He said even experienced hikers had gotten turned around here, and so he had given me a re-route. After my experience back in that clearing, I decided to take the re-route. It was pretty long, and all on gravel or paved roads – not fun for the feet.

While on the re-route, I heard lots of hunting dogs barking and yowling. Soon several pick-ups filled with dogs in cages rumbled by on the gravel road. A few dogs were running along the road, bells jangling around their necks. I stopped one of the hunters and asked if the dogs had bear bells on. Yep, he said, to keep away the bears and also the wolves, the latter of which would kill the dogs without hesitation. I said a lot of hikers had bear bells on, but I didn’t have any. He told me bear bells really aren’t that effective; what I needed was mace. Yikes!

Eventually, I got back to the trail at a wayside park. And it was here that I finally met Papa Bear and Hiking Dude (see photo), two men I’d heard were thru-hiking east to west. I’d read a bit of Hiking Dude’s blog before I started my own hike. The two were quite nice, and we chatted for a while, swapping tales of the trails we’d each just left behind.

I was glad to hear my next few miles would be easy. I felt badly I didn’t have equally cheery news for them about what lie ahead. Papa Bear told me tomorrow was the start of some kind of bow hunting season, and he’d purchased blaze-orange hats for just $3 at the Wal-Mart in Antigo. Well, the Wal-Mart is right behind our hotel (I love this hotel), so I figured I’d get me one for tomorrow.

I continued on my way, and suddenly got a call from Doug. He’d arrived early. Looking down at my watch, I was horrified. He was early, and I was about two hours behind schedule, thanks to getting lost and the long detours I’d had to take. Thankfully, the rest of Parrish Hills and Highland Lakes West were great – mainly Highland Lakes West, which was mostly a flat, wide, dirt path. I was able to run much of the way, and shaved an hour off my expected arrival time.

Doug and I enjoyed a great fish fry in Antigo at Heart Breaker’s Bar. I highly recommend it. And great crew member that Doug is, he ran over to Wal-Mart and got us both blaze orange hats.