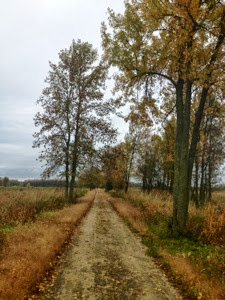 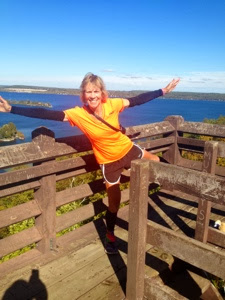 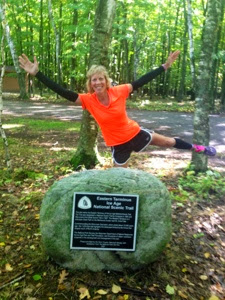 Today’s itinerary: pass through Forestville, then Sturgeon Bay, then hit the eastern terminus! Boy, was it a great last day.

The forecast called for rain until about 9 a.m., then sunshine. Although I wanted to leave at 8 a.m., it was raining pretty steadily then and I figured it wasn’t smart to get soaked right off the bat. So I waited until about 8:45, when the rain had subsided to a light drizzle. And then I headed out of Algoma and onto the Ahnapee State Trail.

As with previous sections of the Ahnapee State Trail, it was flat, easily runnable and scenic. Once again, I was surprised by the number of people fishing. Made it in and out of tiny Forestville with no problems. The weather stayed overcast and slightly drizzly for much of the way.

Ed met me on the rail-trail when I was about two-thirds of the way to the terminus and joined my parents in supporting me.

Heading Out of Forestville

I continued along the rail-trail past Forestville, arriving in Sturgeon Bay around noon or so. The sun broke out, and suddenly the weather was gorgeous.

The path through town was scenic and well marked. Potawatomie State Park was pretty technical, filled with slick rocks and roots. I was dying to run the last few miles (I’d been able to run all the way from Algoma), but after tripping and slipping a few times while walking, I decided to play it safe and walk the rest of the way in.

I hit the Eastern Terminus at 2:06 p.m., and found my two sisters and their families waiting for me as a surprise, along with my parents. Ed had walked me in. What a great ending! We celebrated with lots of photos and champagne, plus a walk up the tower, which provided killer views of the lake. And the Packers won today – what more can you ask for?!

I’ll be posting some post-trek thoughts in the next few days, so keep reading. Plus, starting the end of the month, I’ll be tackling the Natchez Trace, another one of our nation’s 11 National Scenic Trails. The Trace is a trail you either drive or bike, and Ed and I will be biking its entire 444 miles (714.6 km). That seems so lame after walking/running 1,100 miles (1,770 km)!

Tonight Ed and I are at the Inn at Cedar Crossing in Sturgeon Bay. Had a great soak in its whirlpool, into which I dumped eucalyptus-scented epsom salts. Now I’m enjoying some of their tasty, soft chocolate chip cookies – and the thought that I DID IT!