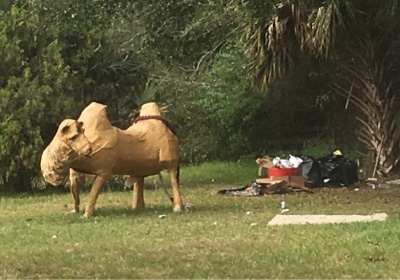 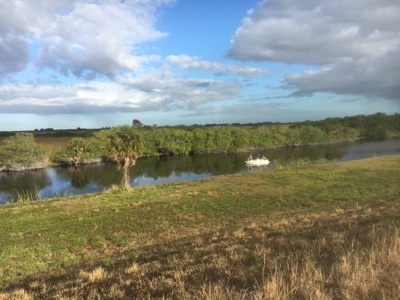 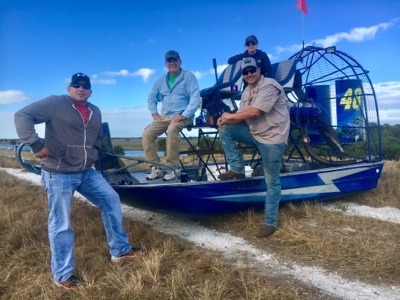 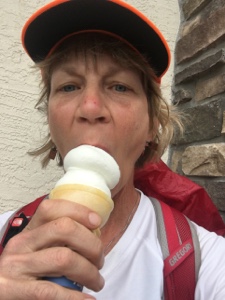 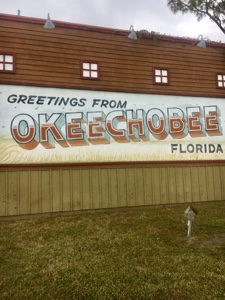 Moon Shadow dropped me off this morning at Indian Prairie Canal, where I’ll be en route to Platts Bluff today. She used the rental car I picked up last night.

So, I started the day continuing to hike along the levees for about 10 miles. Then, at 9:30 a.m., I ran into four people and two air boats up on the levee. What the heck?! Turns out they were boating for the day and taking a break. The people explained that the air boat propellers can push the boats up on land, and there’s a protective coating underneath so the hulls don’t get ruined. So they were just chilling out on the levee (and drinking beer already!).

Well, the levee trail ends at Buckhead Ridge and is supposed to continue along another levee. But it’s under construction and there’s a road-walk detour. The detour is six miles longer than the real trail, so I had Moon Shadow shuttle me up the road six miles. It would have been dangerous to walk on the highway anyway.

So, six miles up the road put me in the middle of Okeechobee. There are a lot of Snowbirds here, as there probably are in most parts of Florida. And they’re easy to spot. I ran into a bunch of them when I stopped in at Dairy Queen for a cone.

Now, I didn’t mind walking through Okeechobee at all, especially since I got that ice cream cone! But the detour then takes you seven miles west along Highway 70 before rejoining the trail. Well, Highway 70 was a nightmare. The speed limit is 60 mph and the traffic was consistently going way over that. In addition, people were passing recklessly and the traffic was incessant.

For one mile, I counted the number of vehicles going past. And there were one to 10 cars passing me every five seconds. I’m not kidding! The longest break between cars whizzing by was 30 seconds. One guy purposely drove right down the white line at me, and many people waved at me to get off the road. This should not be a detour route!

But one nice couple did pull over and ask if they could give me a ride. The woman had done the AT before and recognized me as a distance hiker. They pulled over when I only had a half-mile left of the highway, so I thanked them but passed. It was sure nice of them, though.

Once I got off Highway 70, things were fine. I was on another road route for the final miles of the day leading to Platts Bluff. But luckily, only a few cars were on the road and it was peaceful. This was a day I’m glad to put behind me.