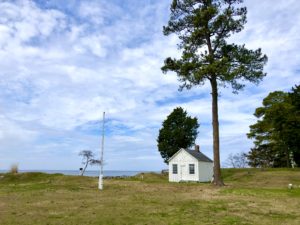 Today I moved down to Point Lookout, the southernmost point on Maryland’s Potomac Heritage Trail miles. The drive took about 90 minutes. I’d been trying for weeks to find someone to shuttle me between Point Lookout State Park and St. Mary’s City with no luck. On impulse, I asked a young park ranger I spotted as I drove into the park if she knew of someone. She offered to drive me to St. Mary’s City at 11:30, when another ranger came in so she could go on lunch break. How nice!

I drove my car to the end of this peninsular park and found a few other families enjoying the area. Construction workers were working on the lighthouse, so that was blocked off. From this part of the park you can see where the Potomac River and Chesapeake Bay merge, which is a rare sight, apparently.

At 11:30, the ranger drove up. However, she had bad news. Her colleague reminded her she lives with her grandma, and with COVID-19 raging, it wouldn’t be safe to shuttle me. Rats.

A construction worker then drove up to deliver some equipment. I asked if he’d give me a ride back to St. Mary’s. He was game, but his boss said no, for liability reasons (driving a company vehicle). At that point, I gave up. I’d tried my hardest, but I’d have to be content with an out-and-back covering the same mileage.

By now, it was nearly noon. Thank goodness I only needed to hike 14 miles (22.5 km) today. The first few miles led through Point Lookout State Park, which was once home to a POW camp during the Civil War. There were some earthworks plainly visible, plus some reconstructions of the camp enclosures. Park staff and visitors say the site is haunted.

Once out of the park, the rest of the hike was along a relatively quiet highway. Luckily, all the rain and gloom was in the morning. During my afternoon hike, I had sunny skies and pleasantly cool temperatures.

Back at Point Lookout, I tried to check out the Civil War Museum, but it wasn’t yet open for the season. Darn.

I really wanted to camp at Point Lookout, but the campground hadn’t yet opened for the season. I’d found a place online called Dennis Point that was about 50 minutes north, and which had opened for the season two days earlier. I’d tried to make advance reservations, but

could never reach anyone until yesterday. Thank goodness I had a place to stay!

When I got to Dennis Point, the office was closed and there was no note for me about which campsite to take or what to do. Luckily, this campground is also a marina, and a guy on his boat told me where the campground was and said the bathrooms and showers were right here, below the office. And they were open 24/7.

Since I was right there, I showered. Their set-up is nice – there are several separate rooms, all of which have a shower, toilet and sink. I also spotted a laundry room at the end of the hallway.

After showering, I set up camp. I’m the only person in the entire campground, and I saw just one man and his dog in the RV section.