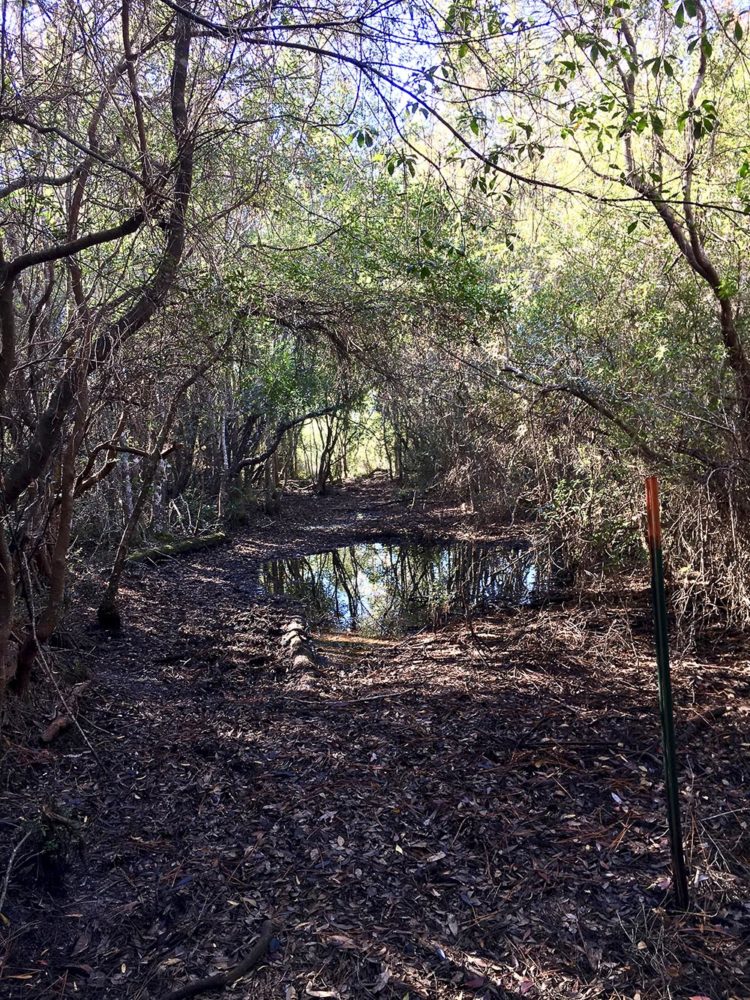 Today was my hike through Bradwell Bay, and I was excited yet nervous. It’s one of two swamps along the Florida Trail, and I was doing it solo, unlike our group trek through Big Cypress Swamp back in January.

Because I had five miles through Bradwell Bay, which is a lot for a swamp, I planned to hike just 12 miles overall. In swamps, the average person goes about one mile per hour.

Trail angel Linda Patton told me the east end of Bradwell Bay was dry, but the west was wet. Good to know. So, I had about seven miles of hiking to start with before entering the east end of Bradwell Bay. These seven miles were pretty overgrown, so I had to do a lot of what I call “bushwhacking light.” It wasn’t terrible, but annoying. This is the start of hiking season, though, so the volunteer crews are just getting out to maintain the trails. I knew this going in, so no big deal.

At one point while I was hiking in an area akin to a garden/hedge maze – tight walls of bushes on either side – I heard this chuffing sound for several minutes. First, I thought it was some of the wild pigs or boars that you have to watch out for. But no, that wasn’t the sound. What was it? After a few minutes, I realized it was a bear. I couldn’t see where it was, but I could tell (or I thought I could!) that it wasn’t agitated. It appeared to be calling to another bear, or maybe to warn that a human was near. I grabbed my bear spray and held it in my hand for about 10 minutes until I was convinced it wasn’t coming after me. There wouldn’t have been any place to run in that narrow, tight maze.

Bradwell Bay turned out to be a disappointment. It was 99 percent dry, something that is very rare. And I was really looking forward to a challenging stretch that I could conquer solo. But we live in a time when the climate is never predictable anymore.

Actually, I did have one slight challenge. There was one soggy part where the mud sucked your feet down to the ankles, and I feared I’d lose my shoes. It was hard to get my feet out. Once, I even sunk down to one knee. Being alone, that was concerning. But I managed to get my leg out, and this mucky stretch wasn’t too long.