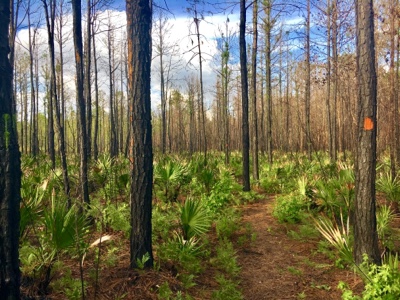 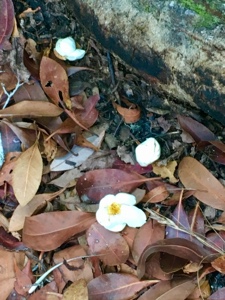 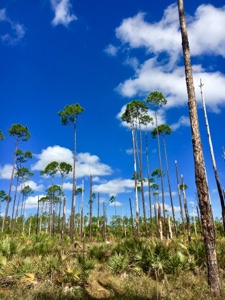 Another late start today (9:30 a.m.) on the road to Chuluota Wilderness Area. But while it was still hot out, I was again blessed with wind and low humidity.

I was worried there would be lots of ticks and chiggers in the Tosohatchee State Preserve, but due to this year’s dry “rainy season,” there were no bugs. Excellent!

The first part of the trail was on sandy footing, so that was hard. But then the trail went into the woods and was delightful. For a while, anyway. Then I started walking into spider webs.

Now, spider webs are pretty common on any hikes. But these were made of some super-sticky webbing that was pretty gross. Even worse, a lot of the webs had spiders in them. The spiders were yellow and black and maybe red, and vertical. That is, they weren’t fat, but tall and lean.

To avoid the spiders and their super-sticky webs, I began swinging my trekking poles in between any trees that were close together on either side of the path. Those spots were the areas most likely to have webs. It was mentally taxing, as you had to keep your eyes peeled every second.

Suddenly, the webs were gone and the trail was beautiful again. That is, until they resumed! Rats. This time there were more webs, and I saw one spider that was probably five inches long. ICK!

Once again, the spiders disappeared when the trail opened up. And so the last six or so miles to the Chuluota Wilderness Area were very enjoyable. The terrain was prairie-like, then wound through a proscribed-burn area where the palmettos were regenerating, then through a very serpentine path, and so on. The terrain kept changing and everything was gorgeous. It also helped when the sun and heat went down.

It was a long day, due to the late start; I didn’t finish until 7:30 p.m. But I’m so thankful to be able to explore such a beautiful part of our nation.