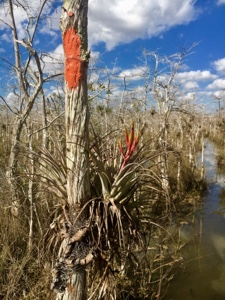 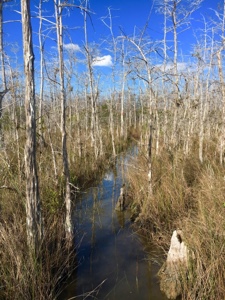 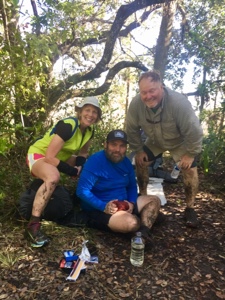 My friend, Judy, was scheduled to meet me at I-75, where hikers emerge after Big Cypress Swamp. I’d told her to meet me at 10-11 a.m., based on me hiking out of Ivy Camp. But our group had stopped earlier at Oak Hill Camp the previous night, so I knew I’d be a little late. No problem, I thought. I can make up a lot of time once I hit Ivy Camp, as all of the intel we had said the swamp pretty much ends at Ivy Camp.

Boxcar, Pyrite and I headed out of camp early today, leaving the rest of the gang to follow. It’s four miles to Ivy Camp, so we thought we just had four miles of swamp left. The day was beautiful and sunny, and we slowly made our way through the swamp. It’s hard work, but gosh is the scenery beautiful.

By the time we reached Ivy Camp, we were all spent. We were hiking about 45 minutes/mile again. The guys decided to take a long break here, but I was anxious to move on since I knew Judy was waiting. I took a 5-minute break and then plunged back in, expecting the swamp to quickly dry up. It didn’t.

Basically, I had another 1.5-2 miles of swamp to go through, then lots of really deep mud that was possibly even harder to negotiate. So much of long-distance hiking is mental, and facing those conditions when you think you’ll be on dry land was very disheartening. I thought I’d never reach I-75. Of course, I did. And when I did, I realized I’d hiked through part of the swamp solo. I’d been so afraid before to be in there alone, but I was just fine.

Judy planned to hike with me a few miles once I emerged, then hike back to her car and drive to Billie Swamp Safari, our lodging for the night, then hike back in to meet me. Well, we hiked only five minutes or so on the trail north of I-75 when she spotted a huge alligator sitting on the side of the road. Its snout was almost touching the trail. She didn’t want to continue on, mainly because she didn’t want to have to pass it later, alone. So she turned around and I scooted past. A few minutes later I saw a coral snake slither across the path. Yikes! That was the extent of the excitement, thank goodness.

Judy met me coming into Billie Swamp Safari (a multi-purpose entertainment venue with primitive sleeping accommodations), and we settled into our “chickee,” a traditional home once used by the Seminole. The best part for me: A SHOWER! Real, cooked food in the cafe was pretty sweet, too.