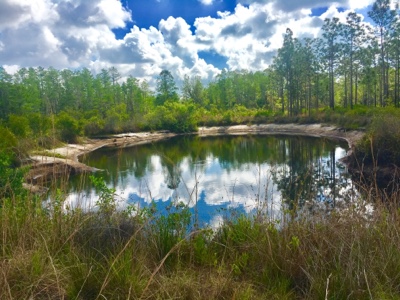 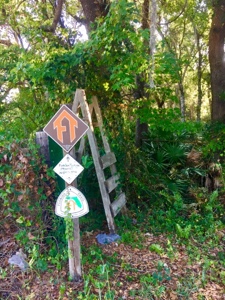 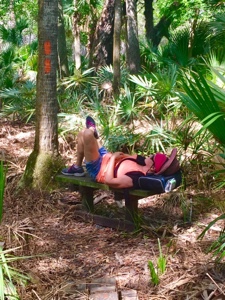 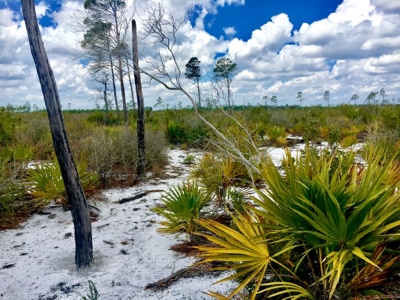 Today I began at Forever Florida, a conservation area that offers ziplining, tours and other entertainment. I planned to start hiking early every day to avoid the worst heat. But Sunday night, I had only gotten two hours of sleep in order to make my flights. So I really needed to sleep in. Thus, 10-Miler and I didn’t hit the trail here until just before 9 a.m.

Still, the morning’s hike was gorgeous. Much of the Florida Trail in Forever Florida runs along wide roads used by the group’s tourist vehicles. Some areas got pretty sandy, but every time I was getting annoyed by slogging through the sand, the land changed and the footing was firmer.

At one point, I met an employee of Forever Florida. He said this was the driest spring in Florida since the 1800s. Normally, the area I was walking on would have many puddles and my feet would definitely be wet, he said. Also, there would typically be a field of yellow Bachelor’s Buttons now, but the drought had left them unable to bloom.

Sometime around noon until maybe 3 p.m., the trail got a lot scruffier. Some areas had had prescribed burns, while others were just scruffy. In one spot, it was very sandy and you couldn’t make out the trail. So I had to hike blaze-to-blaze. Another area was filled with dead palmettos, which made surprisingly tough footing. I tripped on a lot of them.

Ten-Miler met me with about three miles left to go. She was really struggling with the heat. Unfortunately, we both ran out of water, despite having packed a lot.

Back at her truck, I jogged the remaining 5.3 road miles. It was a hot day, for sure. But once again, there was enough wind and low humidity, so it wasn’t that awful. And – YAY! – no ticks again!

Tonight, Judy and I are staying at a La Quinta in Melbourne. It’s very nice.