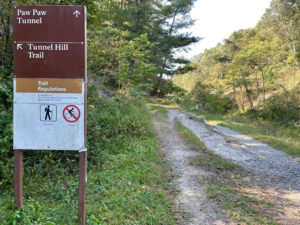 I needed a great night’s sleep to prepare for the hike today, which featured the Paw Paw Tunnel. Or should I say, featured the steep climb up and over the mountain that the tunnel goes through, as the tunnel is undergoing repairs. But alas, it was not meant to be.

I have no idea why I couldn’t fall asleep. I was exhausted in body and mind. Yet the minutes ticked by as I suffocated in the heat and humidity inside my tent. All I could smell was how awful all of my clothes and gear smelled. I heard Chris snoring, even though he moved his tent far away so as not to disturb us. At one point, Zach yelled out in his sleep. I heard bugs and birds and trains. But sleep did not come – until about 4 a.m. And my alarm went off at 5:45 a.m. Sigh.

Heading for the Paw Paw Tunnel

Perhaps I couldn’t sleep because I was worried about today. Storms were predicted to hit around 4 or 5 p.m. I’d decided I was mentally exhausted and needed to get to my motel, the Fairfield Inn, a day early. I didn’t want everything to be wet with both sweat and rain. But how would I jettison myself from the trail?

I decided to stop once I completed the Paw Paw Tunnel, about 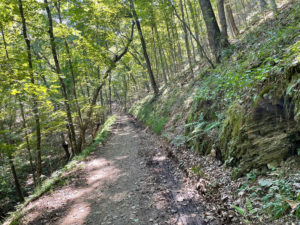 11 miles (17.7 km) into my day. But how would I get to Cumberland? I hadn’t had cell service for more than a day. If it was difficult to get Uber/Lyft 30 minutes from D.C., I was sure it would be impossible 30 minutes from Cumberland.

Perhaps there would be a lock house for rent on the trail. Or maybe some tunnel workers would take pity on me and drive me to town. The guys suggested last night that I hike the few miles into the town of Paw Paw and check at the gas station. All I knew was that I had to get to Cumberland and a motel, somehow.

And Then, a Miracle

Today the three of us broke camp in a wet fog. I began trudging toward the tunnel. Suddenly a small clutch of cyclists went past. Then another. And another. Apparently a group of 50 was cycling the C&O via the Adventure Cycling Association. A few heard of my plight and said the tour leader, Bob Westgate, would help me. He was waiting at an aid station on the other side of the tunnel. And even though they were riding faster than I was hiking, the group was so strung out they said he’d still be there by the time I arrived. 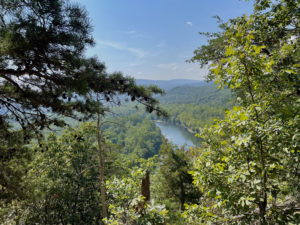 And so around noon, I made it up and over the mountain – 1.4 grueling miles (2.3 km). At least there was a nice view for the work! I was ahead of the last few cyclists, and Bob said it would be no problem at all to take me to Cumberland. In fact, the group was also staying at the Fairfield!

So I helped Bob take down the aid station and check on another, and then he deposited us at the Fairfield, where they had one room left for tonight. Yes!

Now, at 5 p.m., it looks like the chance for storms has lessened considerably. But I don’t care. I just really needed a break and to wash all of my clothes, gear and myself. I’ve arranged for a neighboring cycle shop to shuttle me back to the Paw Paw Tunnel tomorrow. I can’t imagine I’ll be able to knock off the remaining 30 miles (48.3 km) of the C&O, so I may have to tack some onto Friday’s hike. But I’ll be slackpacking tomorrow and, hopefully, Friday if I can arrange it with an Uber driver I’ve made contact with in Frostburg, up the trail.

And now, my friends, it’s time for a cold beer! I sure as heck deserve it.