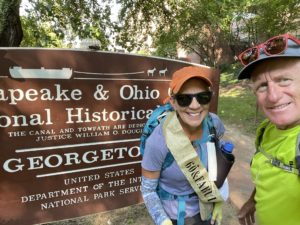 Today’s destination was Swain’s Lock on the C&O Canal Towpath. Yes, I’ve made it onto another major section of the PHT! Woot, woot! It’s also my 60th birthday, a major milestone. I was a little stressed this morning, preparing for the next few weeks. You see, I’m leaving Maura and Andy’s today and will be backpacking from here on out. With the exception of tonight, that is, when our whole group is staying in the lock house at Swain’s.

The C&O Canal Trust has renovated several of the remaining lock houses along the towpath (to varying degrees), and people can rent them. I’ve got the one lock house that has been totally remodeled and features electricity, AC/heat, a kitchen with fridge and a bath with shower. Nice! So I had to pack my backpack for Thursday (when I’ll be on my own), plus a daypack for today, plus have some sheets, towels, fresh clothes, etc. for tonight’s stay, which Maura will bring back home. It was a lot of planning and strategizing and I’m afraid I’ll forget something essential!

Maura drove us to the start of the towpath in Georgetown, then drove several miles down the trail and hiked in to meet us. While I don’t know much of the rich history of the C&O just yet, here are the basics:

The Chesapeake and Ohio Canal was created in the early 19th 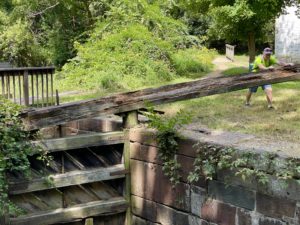 century to link the eastern seaboard with the Midwest for trade purposes and to help make the Potomac River navigable. It stretches about 185 miles (297.7 km) from D.C. to Cumberland, Maryland. It fell out of favor/use, mainly due to flooding issues and the strength of the railroad, in the early 20th century.

In the mid-20th century, when there was talk of obliterating the towpath for commercial purposes, Supreme Court Justice William O. Douglas walked the entire towpath to promote preserving it for historical and recreational purposes. It worked; the towpath is now a National Historical Park.

We met up with Maura and hiked a few miles before she had to turn back. The towpath today is a nice, gravel path. It seems flat, but it actually goes uphill the entire way to Cumberland. It’s also shady, which was a blessing because today’s temps hit 88 F (31.1 C). I hope it’s shady the entire way! 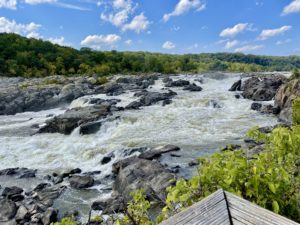 Ed and I passed many old locks along the way. There were originally about 74, I believe. You can see the old wooden beams used to crank open the gates, which is pretty cool. And you can see the brickwork around the locks.

Around mile 14 (22.5 km), we passed a viewing area for Great Falls. We hiked there on Labor Day on the Virginia side of the river. It was packed then. It was fun to see it from the other side of the river with essentially no other people around.

We saw a lot of water birds in the canal, including some cool Great Blue Herons. The canal, by the way, alternated from being dry and full of vegetation to filled with murky water to flowing freely.

We also saw a volunteer bike patrol guy for the C&O. I asked him about his position, and he said volunteers bike up and down the entire path to make sure people are OK, answer questions, hand out bandages, etc. Good to know! He also said 85-90 percent of the users are cyclists. I knew hikers were in the minority!

Settling in at Swain’s 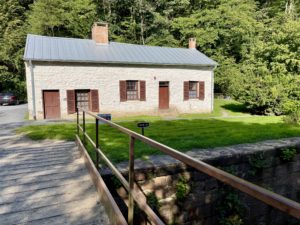 I didn’t realize how hot and sweaty I’d gotten until we reached our lock house accommodations. It’s air conditioned in here, and boy did I need that shower! This lock house has a large parking area for people who wish to access the trail, and it’s been pretty bustling. Sort of surprising for a Wednesday night.

Right now we’re waiting for Maura, Andy and John to arrive. They want to experience a night in a historic lock house, plus party down for my 60th. 🙂