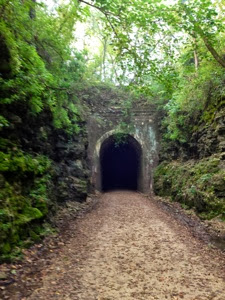 Today’s run/hike to and through the Arbor Ridge segment was epic for many reasons. First, I ended the day finishing Arbor Ridge, which runs through the Robert O. Cook Memorial Arboretum in Janesville. Did you hear what I said? JANESVILLE! I am now at the end of the second main “segment” of the IAT, and about to embark on my final push north to Sturgeon Bay. WOO HOO!

My friend Terie Cebe was my crew member today, and she picked me up in Albany in a dense fog. We got to the rail-trail a bit north of Monticello and had a little photo shoot for one of the articles I’ll be writing. Then I was off. I was going to be on the Badger State and Sugar River Trails for about 16 miles (25.8 km), so I figured this was the time to run – on a flat, crushed limestone path, when it was still cool out and relatively shady. So I ran much of the segment.

Only had one snafu. Apparently, at one point the two paths run parallel to one another. But you can’t see it, as there’s foliage in between. At this point, however, you’re supposed to hop from the Badger State to the Sugar River Trail. Either there was no IAT signage or it wasn’t prominent, because I didn’t see any arrows and so stayed on the Badger State Trail – while Terie waited with my water on the Sugar River Trail.

The two trails split a short bit later, and at that point there’s plenty of signage directing you, so all was well. But to ensure she never missed me again, Terie began parking her car across the trail at designated intersections. Ha! There weren’t many people on the trail, but one biker said to her, “Well, that’s sure an interesting place to park your car.”

Oh, saw lots of cranes in one section of the trail. It also passed through a tunnel. Now, when we biked the Elroy-Sparta Trail with our kids years ago, it was a blast to walk through those tunnels, one of which is three-quarters of a mile (1+ km) long. This tunnel was only about a quarter-mile (.4 km), but I got all creeped out.

First, all of these pigeons were fluttering around the entrance, swooping around me (I hate when birds do that). Then, it was quite dark, despite my phone’s flashlight app. And it was kinda creepy, especially with all of the graffiti on the walls and the sounds of water dripping from the ceiling. Since I was alone, my imagination was running wild. So I was glad it was a short tunnel.

Had a 20-mile (32.2 km) connecting route after the nice, shady rail-trails. The temps climbed to about 80 (26.7 C), and despite applying sunscreen several times, I got fried. UGH.

Janesville’s arboretum was pretty cool. Hate to say it, Madisonians, but I think it’s better than ours. Ended the day with a trail record 36 miles (57.9 km) under my belt. That felt great, although I think I might need different meds – these antibiotics don’t seem to be working. Rats.

Tonight I’m at a gorgeous B&B in Elkhorn, Ye Olde Manor House. Rooms are stylish and comfy, there’s an indoor pool and the food is fantastic. Definitely one to keep in mind.