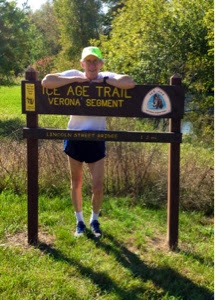 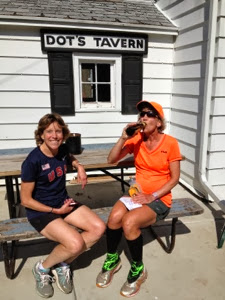 Today runner friends John Selbo and Ann Heaslett were my crew members as I made my way to the Brooklyn Wildlife segment. We had a great day! That was because most of the day was spent on the trails, which is always a good thing. And I had John or Ann with me on almost every segment.

So, Valley View started in between two enormous homes. It was quite easy to miss the trail if you weren’t looking closely. Plus, who’s expecting a trail to run in between homes?! Anyway, the path ran up into some prairie, then wound down among more homes. Some parts were overgrown. And since it was early morning and the vegetation was dewy, I got pretty wet from the waist down.

The Madison segment took us around University Ridge Golf Course. The signage was a tad confusing at some points. Luckily, John was with me, as it’s easier to find blazes with two people looking.

I’d been on portions of the Verona segment before, and it was well-maintained and scenic. I even got to use a bathroom, a rarity while on the trail.

The Montrose segment began on the Badger State Trail, and I have to say it was awfully nice to be able to run on a rail-trail for a while – a flat, even surface. We made up a bunch of time on that one.

We emerged at a spot I’d been looking forward to for a long time: Dot’s Basement Bar in Basco. At the 2013 Ice Age Trail Annual Conference, lots of thru-hikers and section hikers talked fondly of stopping in for a cold beer at Dot’s. Alas, when we arrived it was about 1:30, and Dot’s doesn’t open until 3:30 daily. I fished a lukewarm Leinie’s out of the cooler and had two big gulps in front of Dot’s just so I could say I had a beer there.

The Brooklyn Wildlife segment had some overgrown spots, but was mostly a beautiful combination of woods and prairie. John kept reminding me to stop and enjoy the views, which were pretty spectacular all day. We really do live in a gorgeous state.

Tonight I’m staying at Albany House in Albany. What a lovely B&B in a historic home. I’m in the Birdseye room, which has a great clawfoot tub for soaking tired feet, plus a comfy bed.

One more thing. While on a connecting road segment, we passed old IAT signs for the Exeter segment. I don’t have that one on my maps, and have never heard of it. I’m guessing it was a segment that ran on private land in the past, and the current landowner doesn’t want hikers on his/her property.