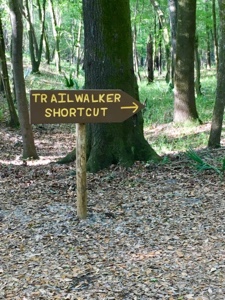 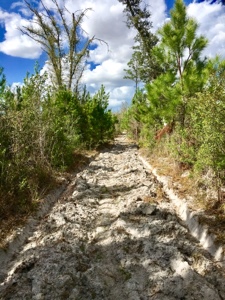 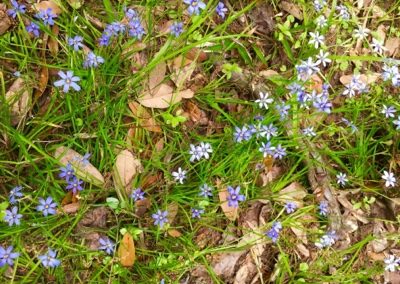 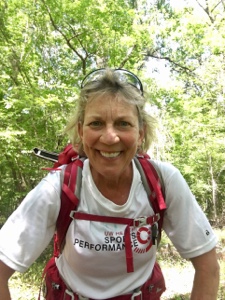 I had no shuttle today, heading to I-10, but that was O.K. Here’s what I did to overcome that.

So, the day’s itinerary called for about 12 miles of trail, then another 12 on roads. Since the road walks along the Florida Trail are spots where the Florida Trail Association is hoping to buy/build trail in the future, it’s not critical to walk every step of a connecting road route. What’s critical, at least in my opinion, is to walk the exact same miles. So, since I had no shuttle, I hiked the 12 miles of trail, then turned around and re-hiked it. Thus, I walked the required 24 miles today. But I did it all on the trail and skipped the road (part of which was a busy highway).

The day started off cloudy and cool, then got sunny and warmer later. And the trail was just lovely. At one point, I ran into a man and his dog. The man had just opened a beer because his dog was 16 years old and had just come back from a visit with the vet, who told him his dog was very healthy. This man mentioned his dog was born on 9/11. After he told me his story, I kept thinking that I can’t believe 9/11 was 16 years ago! Seems like maybe just five or 10 at the most.

Anyway, the last part of the trail had some unpleasant spots, mainly two sections of hiking on this odd, gray, sandy-dirtish substance that’s really hard to walk on. It’s lumpy and bumpy and not as soft as sand, but not firm like black dirt in Wisconsin. I’ve got a photo above. Yuck.

By the way, I can’t believe just two more days of hiking before it’s time to head home.

P.S. Sandra Friend, author of the Florida Trail guidebook, told me later that’s a firebreak. Trail enthusiasts get upset when they create these on the trail. I can see why!