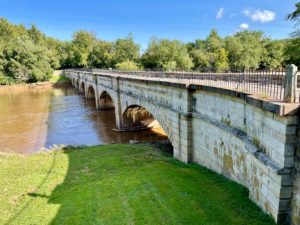 I was nervous about today’s destination – Huckleberry Hill– because it was nearly 25 miles (40.2 km) from Marble Quarry. At least the high was only supposed to be 75 F (23.9 C). I got up before 6 a.m. and was on the road before 8, despite moving rather leisurely.

And what a great day! For starters, the temperatures were cool and there was a nice breeze on and off. As it’s a Friday, the towpath was much more heavily traveled.

Before I even left camp, a woman with two dogs stopped to chat with me. She seemed so kind, I asked if she’d mind taking my garbage to throw away. It’s pack in, pack out here, and carrying an extra pound of garbage (or whatever) is a lot. She said she was happy to do it. Yes!

Making My Way to Huckleberry Hill

The first few hours, the scenery was relatively similar. But soon I started passing some old aqueducts, which were cool, plus 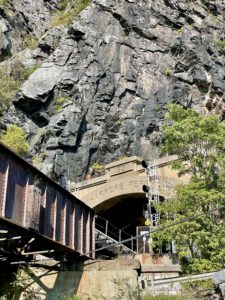 some old railroad tunnels with the names and dates set in concrete, like Point of Rocks. At one point, a man walked by playing the saxophone. Ha!

There was one short detour where a bridge was out. Near the town of Brunswick, I ran into two ladies who lived nearby. We had a lovely chat. They have a friend currently hiking the Appalachian Trail, so that was pretty cool.

After Brunswick, the trail showcased the river more. And once again, the Potomac sported many huge rocks sticking out and lots of rapids. Around Harper’s Ferry, the PHT crosses the Appalachian Trail. There were signs mentioning the PHT here, although it wasn’t made clear that the C&O Canal Towpath WAS also the PHT.

I’d hoped Harper’s Ferry was just a block away, so I could score a frosty beer for dinner. But it seemed like a farther walk, which I wasn’t up for with my high-mileage day. So on I trudged.

When I was 2 miles (3.2 km) from Huckleberry Hill, I passed a pump. The NPS warns that it tests pumps every other week, and if the water is bad the handles are removed. So far every pump I’ve passed has had its handle. My water was running low, but I was so close to camp. Did I really need to fill my water bottles? 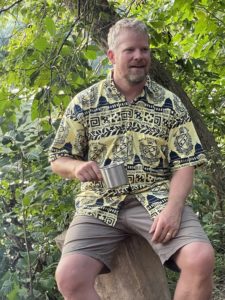 I opted to fill one as a precaution. And good thing! The Huckleberry Hill pump isn’t working (no handle). And while I’m right next to the Potomac, it’s a steep, muddy, wet incline down to the river. I had enough water to wash up (a little) and make dinner, with some left over for breakfast tomorrow.

There’s a large group of guys camping here, plus some single women like me and a couple. One of the guys came over right away and asked if I wanted some of their bean soup. I asked if I could buy a beer from them instead. The guy promptly invited me over for all of the beer I wanted.

I eventually joined their group. They appear to be about 10 years younger than me and all went to college at St. Mary’s, which is part of the PHT! They have a tradition of canoeing for a few days on the river. I’m sure they invited me over so that I wouldn’t mind them being up late at night. But that was fine. They all seem nice and it’s a Friday, after all. Who can argue with people staying up late at a campsite on a Friday?

One guy looks like Brett Favre! He said people tell him that a lot.