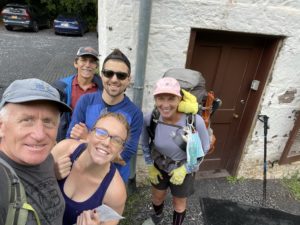 Today’s goal was the Marble Quarrycampsite along the C&O Canal Towpath.  I’ve been having so much fun with MK, Andy, John and Ed that it was hard to leave them this morning at Swain’s lockhouse. But that’s the way it goes.

It had stormed last night and the morning dawned gray and gloomy. We took a few last group photos, and then I was off.

Making My Way to Marble Quarry

Thankfully, the day was predicted to be cool and overcast. And it was, for the most part, with the sun breaking through at the end of the day. That was great, since my backpack is WAY too heavy! I’m bad at packing light. Although to be fair, I’m carrying my iPad for work purposes, plus a lot of different clothing. It’s going to be quite hot this next week, but eventually it will get cool as I head to Pennsylvania and September comes to an end.

The sights today were average. The towpath showcased mostly 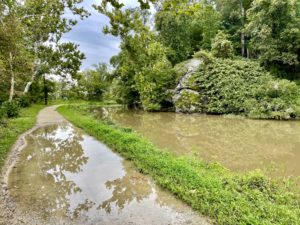 murky water in the canal, and there weren’t too many views of the Potomac. A light but steady stream of cyclists sped past me.

One highlight came at the end of the day when I hit White’s Ferry, the last ferry across the Potomac. There was a small store and restaurant here, so I bought some potato chips and beer, as I was almost at my campsite.

Tucking in for the Night

So, there are many campsites sprinkled along the towpath, most of which are a wide, grassy area with a porta-potty and hand pump. My campsite tonight is plain, but fine. 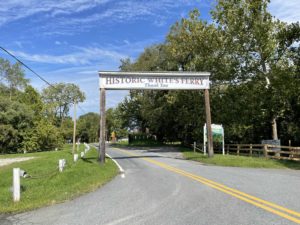 I’m surprised how hard it is to get the pump working, and when the water finally comes out it stops almost immediately when I stop pumping. Is this how they usually work? I can’t remember! Anyway, that made it a little difficult for washing up.

I realized as I was unpacking my ginormous backpack that somehow I hadn’t packed any shorts. I just have the pair I wore today, which are very damp. I’ll have to see if Maura can mail some up the trail for me. How in the world did I forget more shorts?! It’s going to be back in the 90s F (+32 C) soon. YUCK.

Interestingly, Marble Quarry gets its name from the fact that there was once a marble quarry in the vicinity. And marble was crucial in rebuilding D.C. in the early 19th century.

According to the NPS website: Getting the marble to Washington wasn’t easy, as the great blocks of stone had to be boated down the Potomac River utilizing skirting canals around the rough stretches of water.

And there you have it!