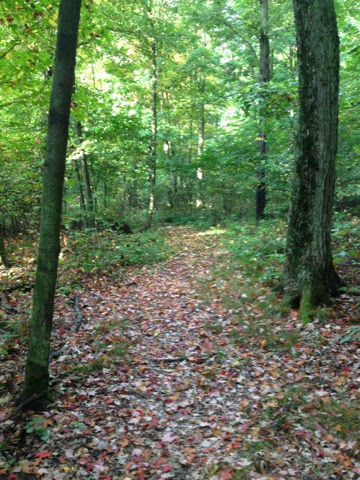 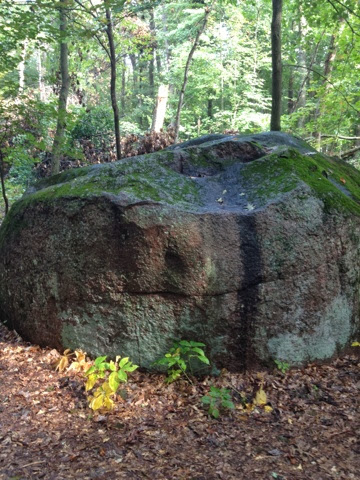 The Deerfield segment was my goal for today. Well, Jason Dorgan took over as my crew member this morning. And Jason is an IAT legend, and one of the reasons I’m hiking/running the Ice Age Trail.

Jason ran it in 2007 in an astounding 22 days and five hours, setting the IAT’s first fast-packing record. If I was Jason, I’d be almost finished now. I can’t even begin to imagine how he did that.

Despite knowing I’d have the most experienced brewer today, I was worried about the weather. We had a thunder and lightning storm about 5 a.m., and it looked pretty gloomy when Jason and I took off. The sun actually came out when I started, though, although it was incredibly humid.

Hartman and Emmons Creeks were a great way to start the day. The properties are beautiful, and very runnable. I enjoyed some of my best trail running to date here. Jason left me a sweet bit of trail magic at one of my first stops: a mini Snickers bar on a large rock.

At the end of the two segments, I had to change clothes. Although I’d only gone about 10 miles (16 km), I’d soaked through everything due to the insane humidity and rising temps.

Today’s connecting route was about 15 miles (24 km). I’m really getting tired of these, but Jason made it easy. Being so experienced, he had everything I might need laid out by his car every two miles (3.2 km). He brought along some chicken noodle soup for me, heating it on his car engine; boy, was that good! (It also gives you lots of sodium.)

Jason also made sure I took my electrolyte capsules and Ibuprofen (vitamin I, he said!). And he insisted I change my socks and shoes halfway through the day. He also got ice and kept my water chilled, gave gave me blister advice and met me on the roads and trails several times. Finally, Jason took pix of me and commiserated about the heat, lack of shade, annoying gnats and headwind I was facing almost the entire way. What a guy!

When we finally reached Deerfield, my feet were so sore from the pavement I was miserable. But after 3.7 miles (6 km) in that pretty segment with mostly soft, great footing, my feet were happy once again. During my last mile (1.2 km), I could hear thunder rumbling. A few sprinkles fell as I was exiting the segment.

But I wanted to get in one last connecting route (just 1.7 miles or 2.7 km), so I walked it in a light rain. About 60 seconds after I got into Jason’s car, the heavens opened and it poured buckets. Great timing!

Tonight I’m at another lovely B&B, the Mecan River House. I think I might even walk right past it tomorrow (there’s a Mecan River segment), which would be pretty funny.