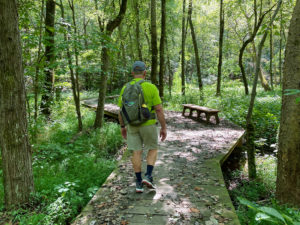 Today’s goal was Mason Neck, although that wasn’t the original plan. Yesterday, today and tomorrow were/will be scattered itineraries, thanks to Hurricane Ida and some other issues.

So today, I’d hoped to hike yesterday’s planned itinerary, which was to hike from the Pope-Leighey House to a few miles past Mason Neck. But just a few minutes into our drive this morning, Ed accidentally turned in the wrong direction. As we tried to get back onto I-95 heading in the right direction, we were nearing the National Museum of the Marine Corps and Locust Shade Park. These areas host portions of the PHT; I’d planned to hike here tomorrow. Since there were huge traffic backups on I-95, we decided to hike here first and let the traffic settle down.

Before Heading to Mason Neck

The Marine Museum looks pretty cool from the outside, so I hope we can check it out the next time we’re in town. The PHT begins at the museum, winding past some outdoor memorials before ducking into the woods. I’m 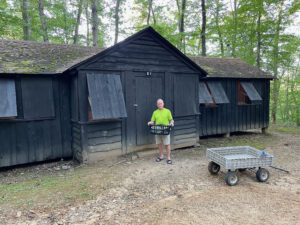 guessing there are rules prohibiting signage on the Marine Corps grounds, because we didn’t see any until we got farther away, presumably in Locust Shade Park.

The park was lovely, with gently undulating paths through the forest. In one part, we were led past a small lake. Unfortunately, while there were blue blazes in this section, they were confusing and often led us down the wrong path. Maybe old trails? The paths also didn’t match with the brand new NPS app. We went off track more than a few times and easily hiked a few extra miles (kilometers). Rats.

After completing the trails here, we drove back east to the Pope-Leighey area, where I did a road walk to Mason Neck. The first section of PHT here piggybacks on the Meadowood Mountain Bike Trail System. These trails were well signed with PHT markers, although they often didn’t match the new NPS app, either, which was frustrating.

After that, we hiked a short stretch of trail that piggybacked on paths at Pohick Bay 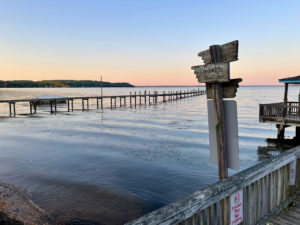 Regional Park, and then Ed and I split up. He moved the car ahead while I hiked the remaining miles along bike paths to Mason Neck State Park.

We got back to our cabin around 5:45 p.m. Tonight camp was empty again, so I showered in the men’s bathroom to avoid the giant spider hanging out in the women’s bathroom. I’m told it’s probably a wolf spider. All I know is that it’s huge and ugly and creepy.

After that, we met my college roommate, Michelle, and her husband, Mike, for a seafood dinner on the water in Dumfries. It was delicious, and it was so great to see Mike and Michelle again.

Tomorrow night we’ll be at Maura and Andy’s, and I’ll be able to wash my clothes and shower in a bathroom without a giant spider!