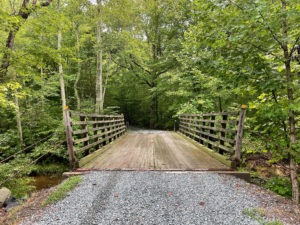 I didn’t plan to hike to the Neabsco area today from Prince William Forest Park. I’d hoped to pick up where I’d left off yesterday (Pope Leighey House), then hike the trails in the Mason Neck area and a little beyond. So why the change in plans? Well, I didn’t realize how remote my cabin was in Prince William Forest Park. No Uber/Lyft driver would pick me up here, and it was a minimum 3-mile (4.8 km) hike to the park entrance. So I decided to start today’s hike right from the park, since the PHT runs through here.

Another factor in my decision was that the remnants of Hurricane Ida were expected to dump lots of rain in this area on and off all day. If I started hiking eastbound from the park, that meant a lot of road miles. And I’d rather hike along the road in the rain, rather than along muddy trails. And so I began the day hiking backwards, if you will, out of Prince William Forest Park.

Making My Way to the Neabsco Area

The first few miles wound through Prince William, which is a national park. While it was easy walking on blacktop, the roads here make long sweeps up and down steep hills. Although I appeared to be alone in the park last night, several cyclists passed me this morning while hiking.

At one point, a sign for Burma Road caught my eye. It seems every large park features a Burma Road! This 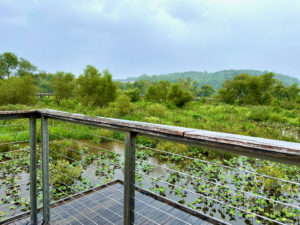 was a gravel side trail. But I suddenly spotted a PHT sign on the post. Sure enough, I was supposed to turn here. So glad I saw that! This trail is not well marked, nor consistently marked.

After emerging from the park, I had several miles of road walking. I didn’t mind, though, as I made good time and there were sidewalks or bike paths that kept me out of the actual roads. I checked out the housing styles in this part of the country and daydreamed.

It had rained overnight, and today the temperatures were cooler and the skies cloudy. That was a plus, too. The latest forecast called for more rain from Ida to begin around 1 p.m. That was about the tine Ed would arrive.

I hit the Neabsco trail section around 12:30, as Ed was landing and getting a rental car. This was also when it began to rain. The rain was intense at times, but mostly not too bad. However, the Neabsco area highlights wetlands, and there’s a popular long boardwalk here. The boardwalk was closed (not sure why), and the rest of the trail got soggy very quickly. There was a lot of regular, short boardwalk here, but boardwalk is often very slippery during rain, so I had to be very careful.

While there haven’t been many PHT signs along the trail so far, they were all over in Neabsco. Unfortunately, there’s a loop in one area, and the signs don’t make that clear. So I ended up hiking right back to where I started from instead of progressing on. Rats.

I took a road shortcut to get back to that loop so I could continue on. It was here, before starting on the trail again, that Ed met me. There was a gazebo handy, so we ate lunch there, out of the rain.

It took a few minutes to find the trail, as it runs between large homes and a wetlands area here. But I got on, and it was easy to follow. It was raining hard again, so I used my poncho and hiking umbrella. But eventually it stopped, so I stowed both. The sun actually came out then. 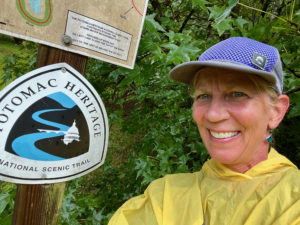 A few times, the trail wound up on berms and around water drainage areas. There was a wealth of signage here explaining where to go, although it was pretty obvious. It was frustrating, then, to see what happened at the end of the day.

According to the new NPS app, the trail continues along Powells Creek up to I-95. I followed the trail to Highway 1, but when I crossed the road I could not find where the trail resumed. Oh well, it’s a trail in progress.

Tonight we’re back in my cabin in Prince William Forest Park. Last night, I was here alone. Tonight, there is a cabin with several young people. My sleeping quilt and bed sheet were damp from all of the moisture; I hope they dry out before I go to bed.

Oh – I noticed a ginormous spider on the bathroom wall in the women’s bathroom. At first I thought it looked plastic and fake, but then it moved. ICK!