Arizona Trail Day 33: On My Own 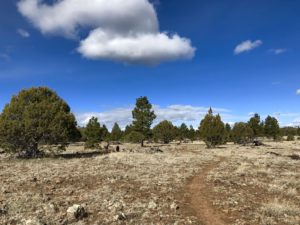 I’m on my own again, now until the end. Ed had to catch a morning flight home out of Phoenix, so he dropped me off at the trailhead at 6:30 a.m. Yawn! It was sad to see him go, but I need to finish this on my own, just as I started it.

Today’s hike took me through the Anderson Mesa passage and part of Walnut Canyon. Anderson Mesa was rocky, so I pretty much counted down the nine miles I had to cover. My left heel blister has morphed into two, and they’re just not disappearing per usual. So rocky footing is especially problematic.

Seeing New Vistas On My Own

The one saving grace was that the scenery in this rocky stretch was pretty. The trail passed several lakes and showcased the San Francisco Peaks, many of which are snow-capped. I will eventually climb these. The temperature continues to be great for hiking – 40s to 60s.

Around lunchtime, I segued into Walnut Canyon. This area was mostly a gentle path through Ponderosa pines, with great footing.

I had arranged for trail angels Brian and Ann (Anne?) Blue to pick me up when I finished, then shuttle me to the Best Western Pony Soldier (yes, I’m still there!). I was supposed to text Brian an hour or so before I arrived. Can’t do that if your phone is dead.

I passed a woman hiker and asked if she had a phone charger. She did, but it was four miles back, in her car. She said she’d help me if I was still at the trailhead when she returned.

I passed another woman and asked to use her phone. I didn’t know Brian’s number – it was on my phone! – but I recalled I’d gotten his name off the AZT website. So I went there, found his email, and this kind lady sent him a note explaining the situation and telling him my 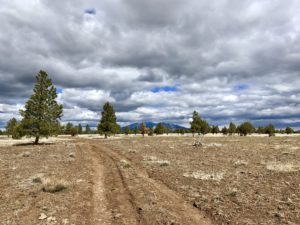 With about a mile to go, I thought I heard someone yell, “Snowshoe!” It was my old friend, CowStep. He was a little behind me on the trail and had passed both women, who mentioned my plight.

CowStep had a charger on him and let me charge my phone just enough to text Brian, just in case he hadn’t seen the email the woman had sent.

I met up with the Blues just fine. They are so kind! They insisted on shuttling me on and off the trail the next three days. And en route to the motel, they stopped at Walgreens so I could grab some Epsom salts (and, I confess, potato chips). Brian also said we can do some reconnaissance around Humphreys Peak tomorrow after my hike to assess the snow depth.

If you do a long-distance hike, it will restore your faith in humanity. There are SO MANY good, kind people in this world. We cannot forget this.