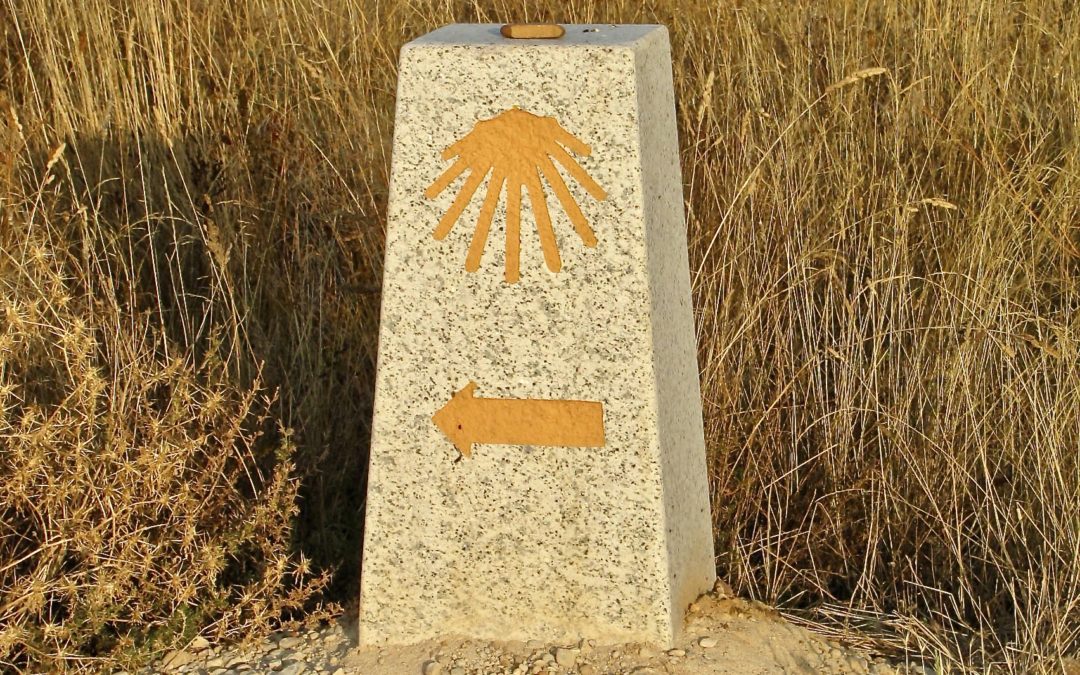 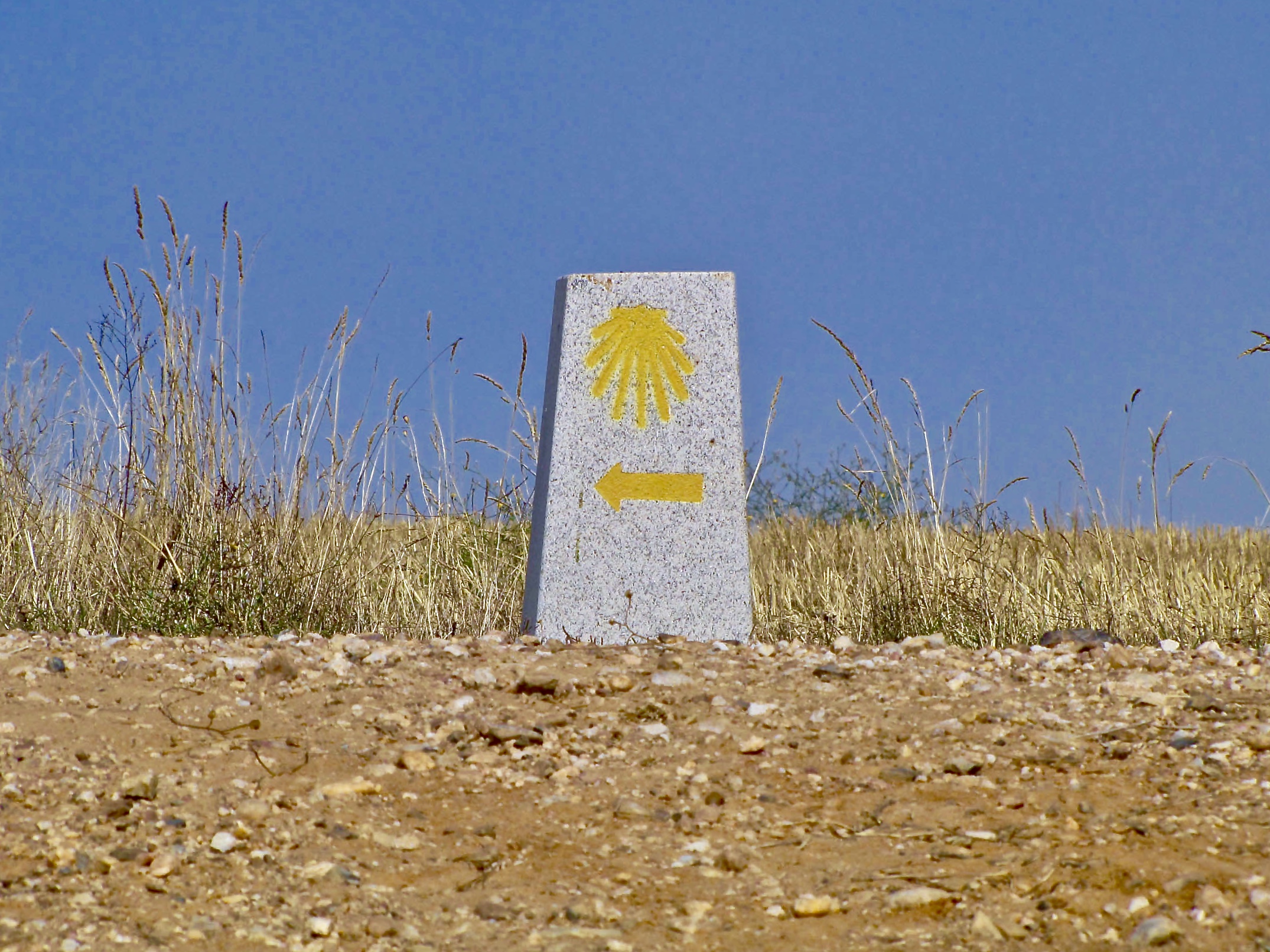 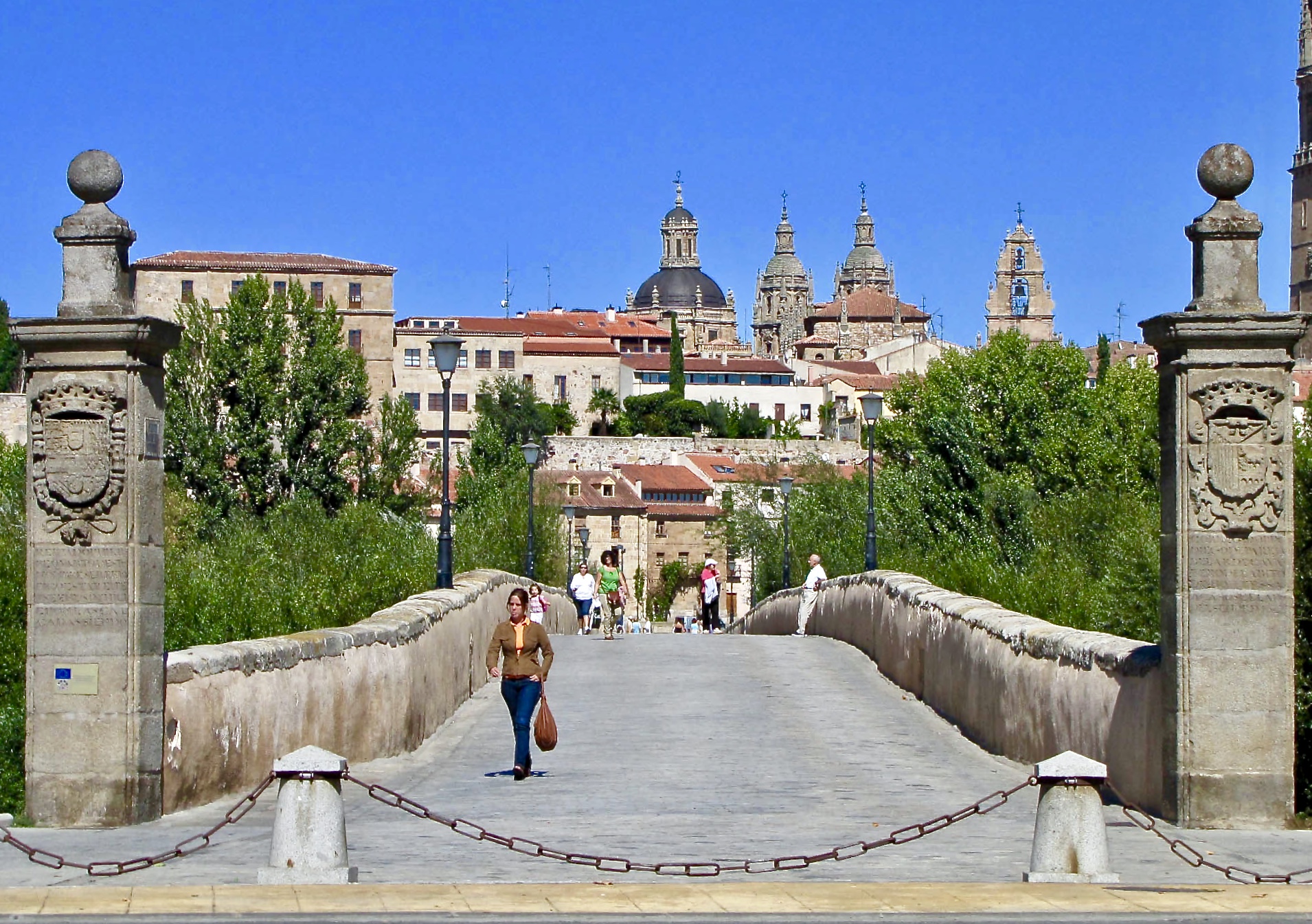 I’ve hiked Spain’s Vía de la Plata Camino, which is filled with spectacular Roman ruins, several times. Here is one of several articles I wrote about my experiences.

The gravel path unspools before me in an endless ribbon, cutting through a sea of rustling, golden grass. I pause a moment, close my eyes and breathe in deeply. It’s so quiet and peaceful here. The only sounds are my boots crunching on the gravel. The grass whispering in my ear. And the occasional bleating of plump sheep grazing in the distance.

Opening my eyes, I notice a bright yellow arrow pointing me to the left. Good thing I didn’t zone out. I’m being guided along by a series of yellow arrows and scallop shells, the latter of which are typically affixed to stone markers that are easy to spot. But the arrows are a bit trickier. They are painted on everything from streetlights and curbs to rocks, trees and weathered barns. Daydream for a minute or two, and you can easily miss a turn.

Adjusting my pack, I make the turn and begin marching up and down a series of gentle swells in the dusty earth. At the top of one, I spot two people far ahead of me, their fluorescent orange backpacks winking on the horizon. Tonight, most likely, we’ll converge at the local restaurant in Granja de Moreruela, a tiny town a few miles ahead. If these two pilgrims speak English, we’ll have a lively conversation about the beautiful terra cotta landscape, any difficulties following the trail signage and the incredible Roman ruins we’ve been passing — all while drinking plenty of vino tinto, or red wine. But even if we don’t speak the same language, we’ll communicate in some fashion. Because that’s just how it is when you’re on Spain’s Camino de Santiago.

The Camino Is an Ancient Path

The Camino de Santiago, or Camino for short, is a centuries-old pilgrimage route to Santiago de Compostela. This Spanish city is said to be the final resting place of St. James the Great, one of Jesus’ apostles. The trail was birthed around 800 AD, when St. James’ remains were discovered in a remote corner of northwestern Spain, then reburied in a small chapel in the city of Compostela. Once word got out about St. James’ burial site, people began streaming to Compostela. They came from across the European continent and beyond, their varied paths eventually funneling into one of six main tracks.

This foot traffic swelled to immense proportions during the Middle Ages, when the Catholic Church decreed Compostela the third holiest city after Jerusalem and Rome. Inns and even hospitals were built to help pilgrims achieve their goal. In some locales, the relentless pounding of millions of feet scarred the earth with deep trenches.

But as the centuries passed, and people’s sensibilities changed, traffic along the Camino dwindled. By the mid 1980s, only 2,500 souls were making the trek annually. Compostela, and St. James, were all but forgotten. Then, a miracle of sorts. The United Nations Educational, Scientific and Cultural Organization (UNESCO) dubbed the Camino a World Heritage Site. The Council of Europe also declared it the first European Cultural Route. Interest in the ancient trek revived, and once again people started making their way to Compostela. But this time they were heading to the city mainly for adventurous or spiritual reasons, not so much out of religious piety.

Interest in the Camino Revived

Today, some 30 years after the world rediscovered the Camino, traffic to Santiago has skyrocketed more than 100-fold. Some 300,000 are making the trek annually, with no slowdown in sight. The majority of these new-age pilgrims elect to hike the Camino Francés, or French Way, which unrolls westward along northern Spain from the French border. But gaining in popularity are the Camino Portugués (Portuguese Way), Camino del Norte (North Way), Camino Primitivo (Original Way), Camino Inglés (English Way) and the Vía de la Plata (Silver Way).

The Spanish government is encouraging pilgrims to consider hiking one of the other main trails to Santiago. A glut of pilgrims on the Francés means the hostels and inns dotting this route are often full before the sun sets, with hikers rising earlier and earlier every day to race to the next town and secure a bed for the night. Plus, there’s little chance for meditation or destressing on the Francés. Each day’s walk is often a cacophony of clicking trekking poles and clumping boots, as hundreds of people march along clogged pathways.

Madly rushing from town to town didn’t sound too pleasant to me, so I elected to walk along the Vía de la Plata. At 600-plus miles, it’s the longest of the six main Camino routes and said to offer much contemplative silence. It also starts in Seville and runs south-to-north, piggybacking along part of the ancient Silver Route constructed by the Romans some two millennia earlier. This means it is rich in Roman ruins, a major selling point.

So far, I’m pleased with my choice. I’m meeting enough fellow pilgrims to stave off loneliness, yet there is no crazed atmosphere. Everywhere I wander, the locals cheerily wish me a “Buen Camino,” or good pilgrimage, as pilgrims are somewhat of a novelty here. I’ve learned that if I enter a small town and find its church locked, a resident will most likely appear with the key to open it up and give me a tour. And the Roman ruins are spectacular.

I’ve already crossed several ancient bridges, including the granite Puente Romano in Mérida, at 2,598 feet the world’s longest Roman bridge still in existence. I have stood under a soaring riverside aqueduct dating to the 1st century, resplendent with 38 arched pillars, and experienced perfect acoustics in a massive Roman amphitheater. Most recently, the Vía de la Plata led me through the Cáparra Arch, a stately, iconic structure that once sat at the intersection of two main roads leading to the town’s forum.

I’m also happy with my decision to stay in quaint casas rurales, akin to bed-and-breakfast inns. Many pilgrims elect to bunk down in the Camino’s famed albergues, or hostels, which are less expensive. But the hostels’ dorm-room atmosphere doesn’t appeal to me. And I enjoy meeting the innkeepers, who fill me in on local lore or chat about current events. Since I speak a little Spanish, and many Spaniards speak a little English, it’s usually not too difficult to communicate.

Now a few weeks into my adventure, I’ve got my routine down. I rise in the morning and enjoy a typical Spanish breakfast of tostada — thick slices of toasted bread topped with fresh tomato, then lightly drizzled with olive oil — and café con leche, a heavenly concoction of espresso and scalded milk. Then I slip on my backpack and start to walk.

Every day along the Vía de la Plata, the way is a delight, playful and full of surprises. I have been led through sleepy towns and leafyforests. Zigzagged up and down steep mountains, one of which was topped with thrumming modern windmills. Tromped along narrow dirt ruts in the middle of someone’s farm field and, more than once, across pastureland, where I was warily eyeballed by bleating sheep, snorting black pigs and brown-eyed cows. So far, I’ve had the experience of a lifetime.

What I’m waiting for now is the magic.

Before I set foot on the Vía de la Plata, I’d heard tales of the ancient path’s magic. If you ever need food or water, the legend goes, it will appear. Lost? Someone will arrive to guide you. If you stumble, a helping hand will be extended. I even heard whispered stories about the ghosts of pilgrims past materializing to offer assistance to those in distress. The first few weeks, I experience no such minor miracles. Then, a flurry of interesting events occurs.

One steamy day I run out of water. Stumbling into a tiny village, I head for the store to replenish my supply. Unfortunately, it’s siesta time and the shop is locked up tight. In fact, the village appears deserted. I sit down on the curb dispiritedly when a man materializes. I tell him my predicament, and he promptly pulls a set of keys from his pocket and unlocks the shop.

Another day, as evening begins darkening the sky, a farm dog rushes at me, snapping and snarling. No lights are on in the farmhouse, and I haven’t seen a soul on this road for the past several hours. As the dog continues to circle around me menacingly, a car approaches. The driver stops, assesses the situation, then transports me to my night’s lodging. He refuses to take a penny for his assistance.

A few days later, I lose the Vía de la Plata and end up on the top of a deserted mountain. Tears well in my eyes as I realize the last marker I saw was at least an hour ago. I say a quick prayer to the Camino gods for assistance, and almost immediately spy a blanket of white moving toward me. It’s a flock of sheep — thankfully, accompanied by a sheepherder. The man lets his charges trot on ahead, then crouches down and etches a map of the correct route into the dirt.

Are these all coincidences, or the Camino? The answer is clear to me. It’s the Camino, of course.

After more than a month chasing scallop shells and arrows along the Vía de la Plata, I reach the cathedral in Santiago. Before entering the sacred space, I mill among the other sweaty, dusty pilgrims amassing in the plaza to exult in their feat. I don’t know if the bones buried underneath this magnificent structure before me indeed belong to St. James. But I do know this: Walking along the Camino de Santiago is a soul-stirring journey. And once you’ve completed this sojourn, you will never be the same.

Anyone who walks the final 100 kilometers of any Camino route into Santiago de Compostela, and has a stamped Credencial, qualifies for a Compostela certificate. A Credencial is akin to a passport, and must be stamped once or twice daily to prove you’ve made the trek. (Most restaurants, hotels and businesses have stamps.)

To obtain a Credencial, contact American Pilgrims on the Camino.

Disclosure: This entry contains affiliate links (among regular links) to products I like, or which I think you might like. This means that, at no extra cost to you, I will earn a commission if you click through and make a purchase.