The Adventure Is About to Begin 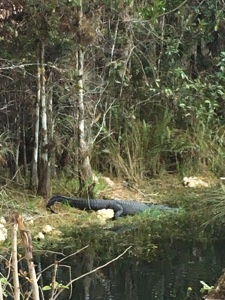 My alligator-filled adventure is about to begin! So, I flew into the Fort Lauderdale airport yesterday and was picked up by my friend, Judy. The next day, we learned about a shooting in that very same airport, not 12 hours after I landed. That was a bit chilling. And it made my looming trudge through an alligator-filled swamp seem tame by comparison.

At 4 p.m., Judy dropped me off at Miami’s Dolphin Mall. There, I met another hiker, Rollie, who was heading to the Florida Trail kick-off like me. We were picked up by Gail, a “trail angel” (volunteer helper), who was going to drive us to a campground near the trailhead. At the trailhead, Florida Trail volunteers had prepared a dinner and set aside an area for us to camp. The idea was for us to get to know each other before heading into the swamp the next day.

En route to the campground, when we were a mere 15 minutes away, Gail’s car got a flat. Rollie said he could change it. But he was having a hard time getting the jack under her car because she had pulled it off onto the shoulder and it was on a weird slant. Meanwhile, cars were whizzing by at 70 mph without a care for us. We also saw an alligator just off the shoulder and across a creek. Yikes!

Will There Be More Alligators Tomorrow?

I also have to add that we had been on schedule to arrive at the campground in daylight. That was much to my relief, as I had purchased a hammock for these first three days of camping and didn’t want to set it up in the dark. I’d spent weeks poring over YouTube videos about how to set up the hammock, bug net and tarp, and practiced tying knots. I was quite nervous about the whole thing,

To make a long story short, I ended up jogging to the nearby Oasis Visitor Center and found someone to help us change the tire. We arrived at the kick-off after dark, and thank goodness a nice, young woman named Julie helped me set up my hammock.

It was very hot and humid that night, and there was no air movement at all. I barely slept because it was sweltering in my little hammock. Or maybe I was just nervous about the next day’s hike and those alligators …