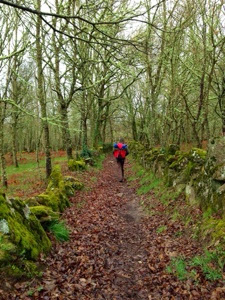 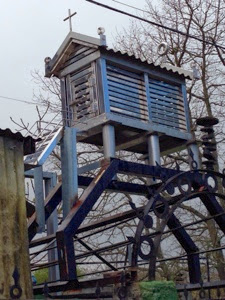 Raindrops keep fallin’ on my head …

That was one of the first 45s in our family (my older brother), and it’s certainly apt. The forecast today was just for rain the first 1-2 hours of my hike, then partly sunny skies. Well, it sort of was true.

The first few hours out of Vilar de Barrio weren’t fun. There were many open spaces, and the wind was so strong and cold, coupled with a moderate rainfall, which just made things miserable.

I forgot how beautiful the segment was from Bobadela Pinta to Xunqueira de Ambia — gorgeous. And although I’ve always dreaded the walk into Ourense, I kind of enjoyed it this time. Yes, you walk a lot on paved roads. And yes, the traffic keeps increasing as you reach Ourense. But there were plenty of times the route dipped you off the highway a bit, and it was nice and distracting to pass through all of the small enclaves/suburbs between the two cities.

Should mention that I’ve found the best cafe con leche deal so far during this trip. It was at Bar Millenio in Vilar de Barrio. Just ,90 euros for a nice-sized cup and a small cookie.

Just three more days and I’ll be in Santiago. I can’t believe it. I’ll be fully rested (and clean, for once) for the Pilgrim’s Mass the next day. I’ve made it to Santiago twice now, and both times the botafumeiro was swung. What will happen this Sunday?!