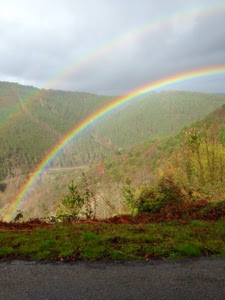 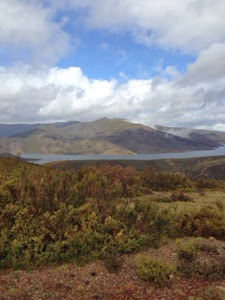 Things are getting a bit tough out here. Definitely tougher than any other Camino trips I’ve made. I keep telling myself what I’m going through is nothing compared to what the “real” pilgrims of the past dealt with.

Today I had 30 miles on the docket. So of course it was supposed to rain all day. Oh, and did I say I’d be in a really mountainous stretch? And that just as I was leaving my lodging, I realized I only had one glove?

Things actually worked out fine. It started raining about 45 minutes into the day. But every time I got to the point where I was really hating it, the rain stopped. I was able to turn my headband into a glove for many miles, then used extra socks.

The taxi driver taking my bags to Laza kindly told me there was a detour marked in A Gudina that I should NOT take. It wasn’t necessary, and it added 5km. Thank goodness he said that! Indeed, the construction was all off to the side, and the Camino was fine. The only difference was that there were more trucks than usual going by in one short (2-3 mile) stretch.

This segment from A Gudina to Campobecerros and then on to Laza is quite beautiful. I’m glad the last time I walked, it was a beautiful, sunny day. Not that I’m complaining. The rain held off for much of the time, although I did face some VERY strong winds on the mountaintop, and a few times the rain would really come down for 5 or 10 minutes.

Still, at one point after an intense few minutes of rain, I looked up and saw the largest, fattest rainbow I’ve ever seen in my life (see photo below). Wow.

Ran into Peter from the Czech Republic a few miles outside of Laza. He said he’d lost the family farm back home, so ended up here, where he was volunteering at a new albergue being built in As Eiras. He also mentioned how he’d seen a few wolves — during the day — since he’d gotten here. HUH?! Locals told him to use the same trick as you do with threatening dogs — pretend to pick up a rock and throw it. Sure. O.K. (ACK!)

Got to Laza and am staying in the great Pension Blanco Conde. I’d stayed here once in the past, and the woman actually remembered me. Had dinner at Bar Picota, the spot everyone recommends. It was good, and they’re happy to make pilgrims dinner at any time. No waiting until 8 or 9. Life is good.