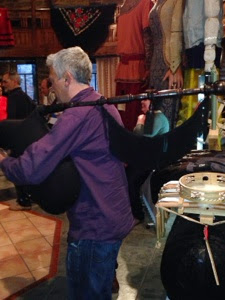 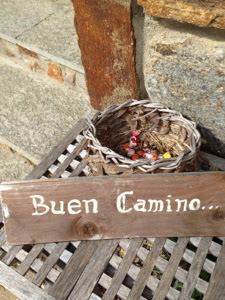 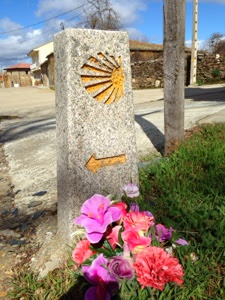 Maura’s tendonitis was pretty painful today, so I left her to explore Puebla de Sanabria (a great city) while I went back and hiked there from Rionegro del Puente, about 26 miles away. The day was mostly sunny and fresh, although at times I was walking straight into a ferocious headwind, which was tough.

It was wonderful to explore this section of the VDLP again, and in a different season. I appreciated the fact that the mosquitoes that had “bugged” me so much in September were nowhere to be seen. While there were some flooded spots, I was generally able to hop around them on rocks and other objects.

There is still much highway construction going on, and the signage can be confusing. One Camino marker between Mombuey and Valdemerilla had a detour sign propped up against it, but the sign was pointing to the ground. So did that mean it was left over from last season, and there was no detour, or …? I took the original route and ended up in yet another construction zone, but was able to see Valdemerilla and so could get there. Whether I went the right way, who knows?

Leaving Entrepenas, a gazillion arrows pointed me to a detour over the bridge. But a local who lives in a house right next to the “real” Camino told me to take the original route, because it was still passable and the detour added 1 km. I did, and it was fine.

Back in Puebla de Sanabria, I got Maura off on the Avanza bus to Madrid; she’ll leave for the U.S. tomorrow morning. It was sad to see her go. Oh — she managed to find these fantastic cream puff-type pastries for us to eat before she left. We’d had one other cream puff this trip in Granja de Moreruela, purchased from the tiny tienda, not a pastry shop. Both were really fantastic. I would never have thought Spain would be the place for cream puffs. But I have to say, they rival the famous ones made at the Wisconsin State Fair. And that’s saying something, seeing as we’re the Dairy State.

Tonight I was able to tour the city’s Giants & Big Heads Museum — very cool. Even better, a group teaching local folk dancing uses the museum to practice, and they were practicing when I stopped in. So I got to hear/watch them, too. Like the autonomous community of Galicia just north of here, the Sanabrian part of Zamora has Celtic influences, so the music featured a bagpipe-type instrument and Celic-type of hand drum.