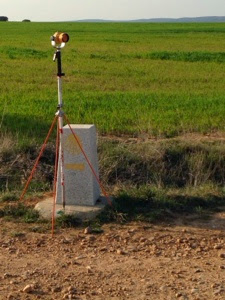 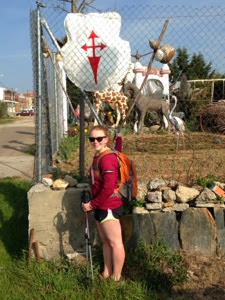 Today was another long day — about 28 miles. We left Zamora and passed through one small town, then headed toward the next, Montamarta. There’s an enormous amount of highway construction going on here (as it had been when I last passed 2 years ago), but this time it’s quite confusing.

While on the trail, we suddenly came upon a new bridge. New as in the road bed wasn’t finished. So this bridge was new, as was another road leading off to the side. No Camino markers in sight, presumably because everything was so new. So which way to go? There were all sorts of concrete blocks that looked very similar to Camino markers on the side road, except there were no arrows or shells on them. Was this a sign for pilgrims to take that path? If not, what were they for?

We took the path, and ended up on the highway. We tried to use our maps to see where to go with no luck. Using my app, I called Montamarta’s ayuntamiento (town hall) and spoke with a woman who told us to take the highway into town. We were only about 2 miles away by then. We continued to walk along the highway, but it was so busy and pretty dangerous. Suddenly across a vast farm field we saw a Camino marker on a farm road, so we delicately picked our way through the crops (being careful to step on the dirt, not the plants) and got back on track. I assume we should have taken the bridge.

After Montamarta we went through a few more towns without incident. Finally we had only about 3 miles to go to reach our lovely casa rural (akin to a B&B) when we stumbled upon more highway construction. Once again, markings were largely missing. I called the casa rural owner, but she had no idea what to do. I was able to flag down a highway worker who randomly was driving down the unfinished road and we made it into town safely. Phew!

We cleaned up in the inn and bought groceries at a small tienda (store), then had dinner at the local bar. There were 3 German pilgrims there, some of the only ones we’ve seen all week.