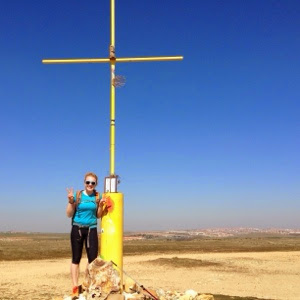 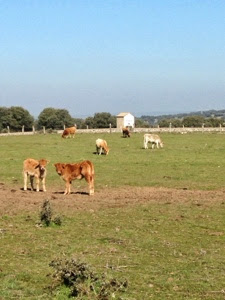 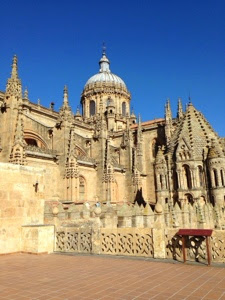 I love Salamanca! It’s long been one of my most favorite cities along the VDLP. But I’m way ahead of myself.

Last night Maura and I had one of the best meals I’ve had in Spain. The owner of the inn (Mari Carmen of Carreras VII) made us a wonderful soup with cod, chick peas, rice and spinach as an appetizer. Then we had a nice little beef filet with an amazing watercress salad. (It took her hours to clean and prepare the watercress; she worked on it the entire time we were on our laptops in the bar before dinner, which was at least 2 hours.)

This morning at breakfast, Mari Carmen showed us Camino-themed bracelets she sells, made by her sister-in-law. While you can buy Camino-themed gifts everywhere on the popular Camino Frances, VDLPers usually have to wait until they reach Santiago to find something. Glad to see things are improving in this regard.

With bracelets in hand (on wrist), Maura and I headed out around 9:30 a.m. It was a beautiful, sunny day and reasonably warm, despite a stiff wind most of the way. Apparently the Camino is a popular cycling route here south of Salamanca. Being a Sunday, cyclists were out in droves, zipping past us all day long.

Today’s walk was about 15 miles, so a pretty short day. We ran about 5 of those miles. The route went through a cattle ranch at one point, and some of the cattle were so close we could have touched them. Cattle often don’t really like it when you walk that closely to them, so I’m always nervous when the VDLP runs through cattle. Luckily they didn’t pay any attention to us.

The route was pretty dry today, so no wet feet. But one big disappointment was the entrance to Salamanca. When I entered the city two years ago, the entrance was lined with little miliario-type stone markers on each side of the path. There were dozens of them, and it was like walking the red carpet. You felt Salamanca was reaching out and welcome all pilgrims. Today, only four were set out. One man told me he wasn’t sure what had happened, but was guessing the rest had been stolen or damaged. Sad.

Got to Salamanca around 3 and checked into the Parador. Paradors are beautiful government-run hotels, typically in historic old buildings. This one is modern-day construction, but it’s very pretty and offers killer views of the cathedrals. Once we cleaned up, it was time to check out Salamanca.

The city is known for its university, once the most prestigious in all of Europe, and its two cathedrals. We were able to tour the cathedral towers, which afford stunning views of the city, plus the interior of one of the cathedrals. Little fact we learned: St. Ignatius of Loyola was once imprisoned in the cathedral dungeon for 5 days. I think the man said it was because there was no priest there at the time, or maybe just that day or hour, so St. Ignatius began preaching. The locals (government?) didn’t appreciate that. Anyway, it was well worth the admission fee (3.75 euros).

The university was closed, but we walked past it, along with the famous Shell House. Stopped in the impressive main plaza. Bought some empanadas at a place I discovered in the past, plus some candy to help fuel us tomorrow. Now we’re just waiting to eat dinner.