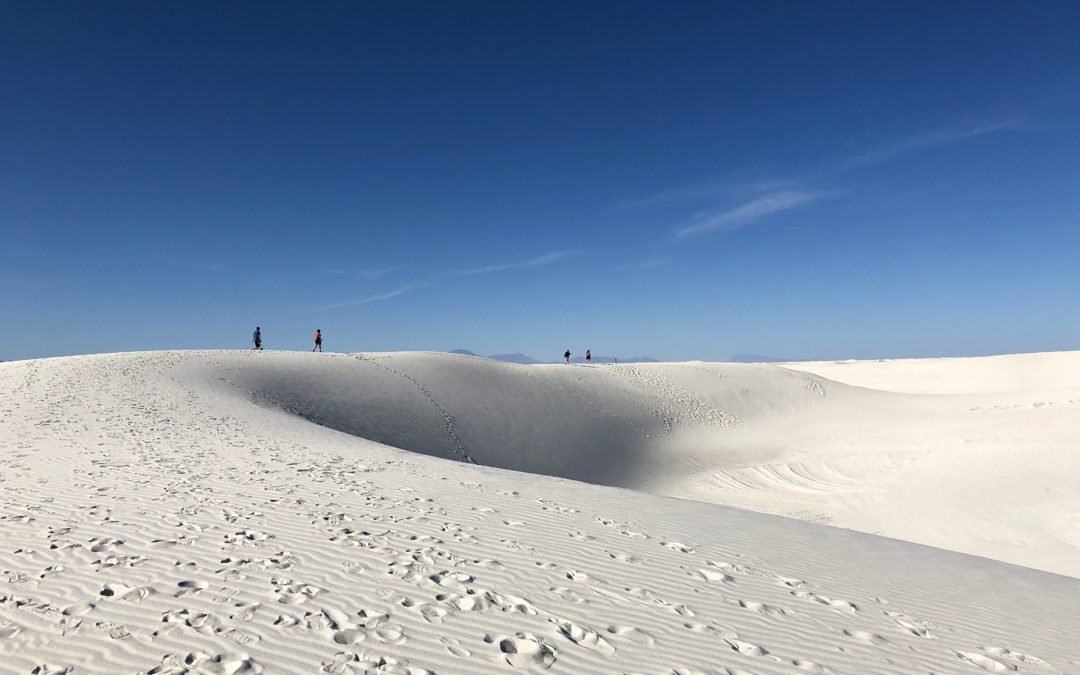 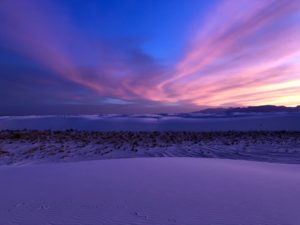 White Sands National Park got its prestigious national park designation in December 2019. From 1933 to 2019, it was a national monument.

When I visited White Sands, I had a blast hiking around the park. But the most enjoyable experience by far was watching the sun set from the top of the snowy dunes. The light exploded across the sky and colored the dunes yellow, then tangerine, then pink and finally lavender. In the morning, the rising sun brushed a beautiful baby blue across them.

I did have an, um, interesting experience with a tarantula while camping. If you want to learn what happened, read the story I wrote about it for the Chicago Tribune. (It’s a good one!)

But let’s talk about White Sands’ history. This national park – now America’s 62nd – lies in south-central New Mexico’s Tularosa Basin, which is part of the Chihuahuan Desert. At 176,000 acres, it is the largest gypsum dune field in the world. And there are only a handful of gypsum dunes in the world. The next two largest are 2,000 acres (Salt Basin dunes in Texas’ Guadalupe Mountains) and 250 acres (Cuatro Ciénegas in Coahuila, Mexico). So White Sands’ existence, and size, are pretty darn impressive.

While gypsum itself is fairly common, gypsum dunes are rare because gypsum is a soft mineral that dissolves easily in water. So it’s typically washed out to sea via rivers and other waterways. But the Tularosa Basin has no outlet. Park materials liken it to a tub without a drain. So the sand can’t go anywhere. It also helps that the area is humid and the water table lies just a foot or two underneath the sand. This helps hold the sand in place.

That being said, the dune field is a very active one. The area is windy, and the dunes can move nearly 40 feet per year.

Researchers believe the dune field here formed some 7,000 to 10,000 years ago, when a lake covering the area dried up. For thousands of years it sat there, likely attracting admiration from the various indigenous peoples who passed through. Then, around 1885, the dunes’ existence was threatened when profiteers wanted to mine them. Thankfully, the mining proposal was thwarted by preservationists, and the area was designated a national monument in 1933.

Now that White Sands National Park has this coveted designation, it is likely to become much more popular. So head there as soon as you can. It’s a bucket list destination for sure, because the sights you’ll take in here are other-worldly.

My top gear recommendation for White Sands: A good camera. These days, I use my iPhone X for all of my photos. Photographers at National Geographic are also fans of iPhone photos, although they also use traditional cameras.