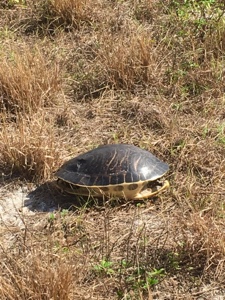 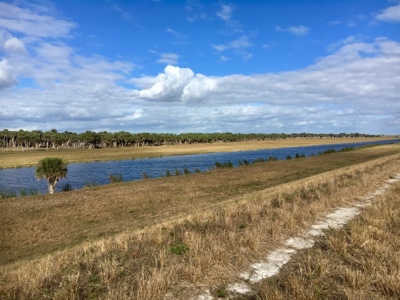 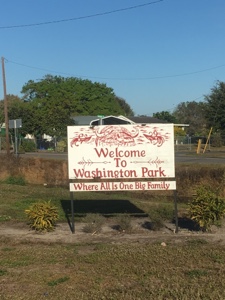 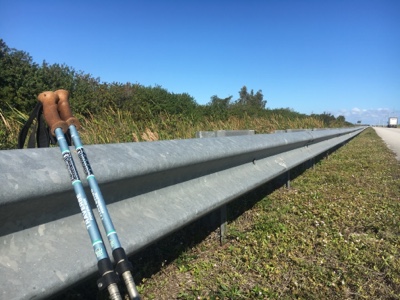 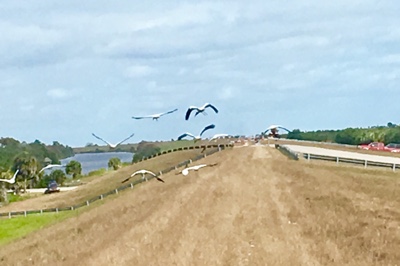 To reach that destination, I first took a cab from my motel in Clewiston to the spot where I left off on the detour yesterday. Later today, trail angel Mike Gormley is going to pick up my bags from the motel, then grab me at Indian Prairie Canal and take me to a car rental place in Okeechobee. What a nice guy!

So, the day began sunny and cool. Yes! I walked just a few miles on a county road and then a larger highway before entering Moore Haven, a nice little town. There was a coffee shop with a giant rocking chair outside and a sign proclaiming, “We are awesome!” I would have stopped in for a latte and asked someone to take my photo in the chair if I hadn’t just eaten an enormous breakfast at my motel.

Hiking on the Highway

So, I had about 10 miles to hike on Highway 78 before the detour ended and slipped me back on the levee. While there were lots of semis going by, it wasn’t too bad. When I hit the levee some clouds moved in – yay! It was nice not to be under the broiling sun all the time.

The levees/canals here were different in that there was a lot of boating traffic on the canals. I passed one lock linking the canal with Lake Okeechobee, which you could barely see, as a lot of land and vegetation separated the two. Rats. I thought the levees were pretty much right next to the lake. On the far side of the canal were lots of homes set perpendicular to the canal and with little watery “streets” in between so people could just hop in their boats, head down their “street” and into the canal. It was pretty cool.

The levee here ranged from crushed limestone to grass/scruff to blacktop. There were occasional benches, which was nice for backpackers/hikers. And there were lots of birds here, too. At one point, a huge flock of turkey vultures was on the path ahead of me. The group kept lazily flying up and ahead a few feet, then settling back down until they realized I was coming again. This repeated itself about a half-dozen times before they realized it was smarter to leave the area.

I ended the day where the levee curved back to the highway. When Mike picked me up, I had a surprise: Edna/Moon Shadow was with him! Since her knee was still sore, she was moving up to Okeechobee in the hopes that by the time her hiking partner, Barb, reached this city she would be ready to hike.

Moon Shadow’s presence was great for both of us because it solved two problems. I needed shuttles the next three days. But Mike could only provide two of them. And he’d be traveling from Sebring, a fair distance away, to help me. Since Moon Shadow was going crazy sitting in hotel rooms all day, the solution was clear: Mike can stay home and Moon Shadow can shuttle me to/from the trail every day, which gives her something to do, helps me and helps Mike.

Tonight I ordered a large Domino’s pizza and ate half of it all by myself. No regrets. I was starving and I’m probably not eating as much as I should all day. It’s so hot I’m mostly drinking water (about a gallon a day).