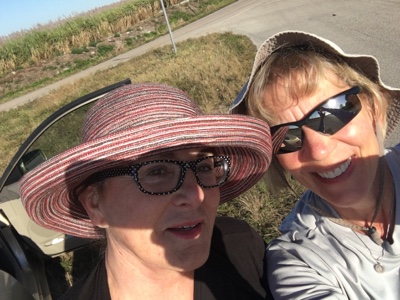 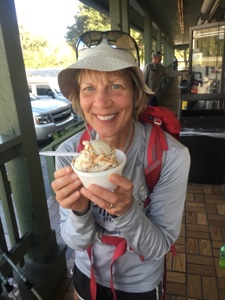 Today the plan was to hike into Clewiston, through the town and then out to the northwest of Clewiston. The day was tough, mentally and physically.

Judy and I had stayed at a Clewiston motel last night; she drove me a bit south of town to get started. Then she left for home and I was alone on the trail, carrying about 10 pounds of water in my pack. My first 4.8 miles were along another levee. But today the footing was scruffy, the sun was in my eyes the entire way and I walked into a headwind. So those miles were unpleasant.

It Was Hot Heading to the Northwest of Clewiston

There was a road walk out in the open sun after that, and I got super hot. I found a tiny shadow falling across the road and ate my lunch in that tiny spot of shade. I told myself I’d treat myself to some ice cream when I got into town.

Luckily, I found a store on the outskirts of town that sold ice cream. I ran into Duck there, another Florida Trail thru-hiker, and he snapped a photo of me. 🙂

The route through town led me right past my motel; my end point for the day was a random point along a road walk several miles out of town. Since I had no one to shuttle me back to my motel when I finished, I decided to split the miles. So first I stopped into my motel room and ditched a bunch of my stuff, toting just the essentials. Then I did an out-and-back hike for those last several hours. To me, it doesn’t matter on connecting road routes whether you hike every step. To me, as long as you hike the same distance, that’s what counts. So that’s what I did.

I hope tomorrow it’s cooler outside.