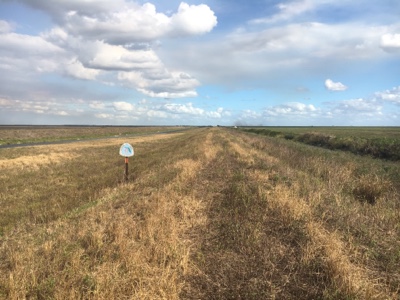 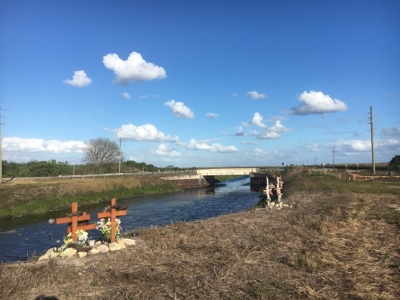 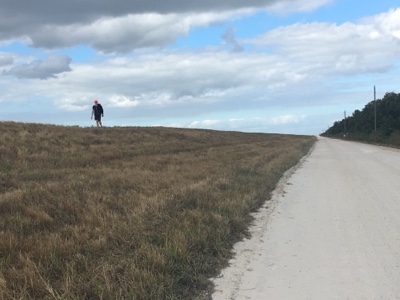 Today’s goal: the town of Clewiston, due north of here.

This morning we had a whole table full of hikers at the Billie Swamp Cafe. Judy was getting into it! I said I felt I had to change my trail name since almost no one knew the name “Valderi” nor the song “The Happy Wanderer” from whence it came. Eagle Eye said I should be Ice Age because of my love of the IAT. That sounded too cold. She then suggested Ice. I said I’d ponder it.

Meanwhile, Kathy was also wanting to change trail names. She started with the Greek name “Sisyphus,” but similarly no one knew who that was. Plus, I told her, it sounded like “syphilis.” So she went with Scout, but decided that was too common. So for now we’ve both Valderi and Scout, but wanting to change our names.

Pancakes to Power Me to Clewiston

I again ordered the pancakes with strawberries and whipped cream. But Pam, our server, brought them out sans whipped cream. I reminded her what was missing, and she came back with a whipped cream bag and carefully put one dollop on top. Ahem, I said, yesterday I got three blobs. So she put three on. We all cracked up.

But enough of that, it was time to hike! Judy drove me back to the spot where I left off and joined me for the first 40 minutes. We had a lovely time chatting and taking in the sparkling blue canal and wildlife. She turned around, drove the car ahead, and again walked back toward me. This stretch was 13.1 miles and took much of the day.

The last part was seven miles on another levee, but instead of being crushed limestone it was ankle-high scrub. Not too difficult to walk in, but it definitely slowed the pace. During the day I made two water drops for Beerman.

While I was hiking this last stretch, Judy got a call from Moon Shadow/Edna, the woman who hurt her ankle on the levee the other day. She was now in Clewiston, in a hotel, recuperating and waiting for her hiking partner to reach her. She had learned we were going to be in town tonight with a car and asked if we could take her to Wal-Mart to pick up supplies and her prescription. No problem, as I wanted to go to Wal-Mart, too.

So we picked up Edna, a lovely woman, and I got to have my first scooter ride! (I had to bring the scooter out to the curb so she could hop on and not have to walk into the store and to the pharmacy.)

That night we got back to our room pretty late, and just ate take-out. Still, it was a wonderful day.