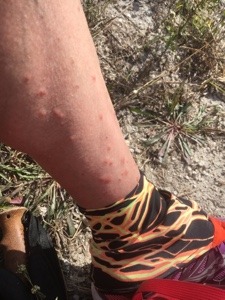 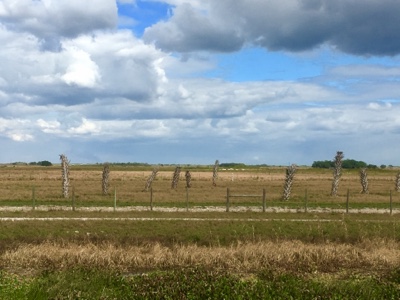 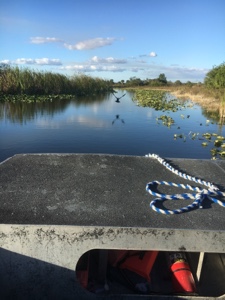 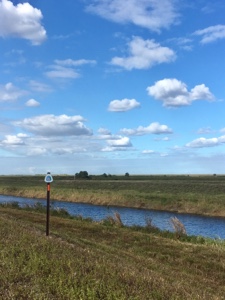 Before heading out this morning toward Deer Fence Canal, we had had to make it through the night.

Last night it was cold out, and cold in our little chickee, which isn’t heated and has screens, not windows. I put my sleeping bag on top of the light blanket that was provided and fared well, but poor Judy was pretty frigid. We filled up on a hearty breakfast of pancakes with strawberries and whipped cream, then set off.

The trail here leaves Billie Swamp and winds through an adjacent town, then along a highway for about 10 miles. After that, you’re taken up on levees that run along the area’s extensive canal system. I did a little jogging with my hiking to get the road miles over as quickly as possible. It didn’t help that there was a head wind, too.

Met a nice hiker named Lt. Dan; boy, could he hike fast! Ran into another hiker I dubbed Mr. Know-It-All because apparently Dan and I missed a blaze and should have gotten off of the highway at one point and onto an adjacent gravel path. Mr. Know-It-All kept showing me where I went wrong on his map, and at one point said condescendingly, “You DO know you’re supposed to be following the orange blazes, don’t you?” He wouldn’t let me get a word in edgewise, so I finally said, “Well, if you would LISTEN a minute, I’m telling you that I simply missed the blaze, and that my map shows the route along the highway.” He left in an huff.

The levee walk was flat and pleasant. There are so many beautiful birds here. Great blue herons and egrets, plus a whole bunch of others that I can’t identify. But they’re all over the canal. The only downside is that you’re out in the open sun.

Judy met me where the levee crosses Deer Fence Road. She said a woman named Edna/Moon Shadow had been hiking with a friend and was having knee problems and so the EMTs came and took her away. Oh no!

We made it back to Billie Swamp in time to take an airboat ride (think “Gentle Ben”) around the swamp. That was fun and beautiful as well. The boat operator spent a lot of time telling us how alligators aren’t vicious at all, don’t go after humans, etc. Then, when we said we were hiking the Florida Trail, he said, “I’d never do that without a gun and a dog.” Huh.

Tonight wasn’t so cold in our chickee.