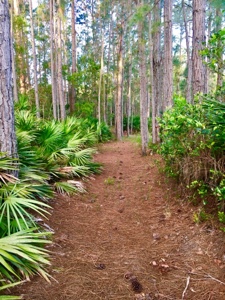 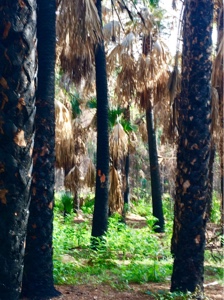 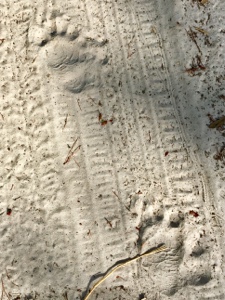 ​Today’s agenda called for hiking a mere 10 miles from Royal Trails to Clearwater Recreation Area. My flight left from Orlando at 2:55 p.m., so no problem. Or so I thought.

I got to Royal Trails, which is a sprawling subdivision, around 6:30 a.m. It was so nice and cool at this time of day! The first 1.2 miles of the hike were on paved roads in the subdivision, but then the path pushed me onto trails. Ahhh!

The first portion of the trail quickly led to sand, which isn’t the greatest for hiking. But a fair portion of the sand was reasonably compact, so it wasn’t too tough.

In one area, the trail dipped into this jungle/swamp-like section, which was a bit difficult to walk through. Thank goodness Florida is having a dry spring. There was not a drop of water here, although the area was very damp, and there was not a single bug. I’m sure this section is horribly buggy when it’s wet.

After this spot, I was on another sandy trail studded with animal prints. All of a sudden I saw a few that were very distinctive – bear prints! Yikes! My last day on the trail in April, I saw two cubs. Would this happen again?

Not quite. Not more than five or 10 minutes after seeing the prints, I rounded a corner and saw a black bear. Luckily, it immediately ran away. But I had to go right past the spot where it had rushed into the woods, so I began talking and singing. I kept up the nonsensical chatter for about 10 minutes before I relaxed enough to quit.

Near the end of my trek, the path went through a large cattle field owned by the Boy Scouts. You had to hike blaze-to-blaze here, as there was no set path. The blazes were pretty far apart, and sometimes I couldn’t spot the next one. But it was clear that you had to cut across the field, so if you just kept walking you’d soon spot it.

My friend/Trail Angel Tammy picked me up in the Clearwater Rec parking area. I’d met her last March when I started here, and she graciously shuttled me two days. Today she shuttled me back to Royal Trails. From there, she and a friend and Tammy’s grandson were going blueberry-picking.

I made it back to my hotel with just enough time to shower, then caught my flight home.

Now I’ll be waiting until November or December to pick up where I left off in March, at St. Marks up in the eastern panhandle. But I won’t be idle. I’ll be hiking my first portion of the North Country Trail in late May/early June, and then thru-hiking the (short) New England National Scenic Trail this September.