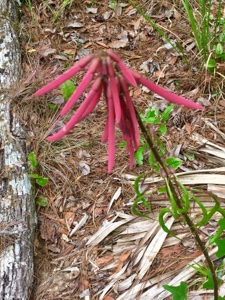 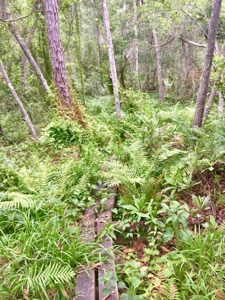 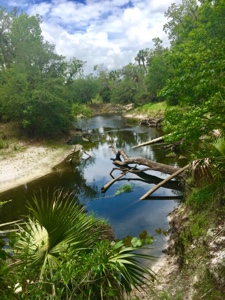 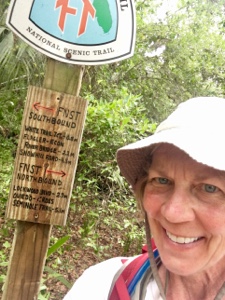 Today’s destination: Soldiers Creek Park. Little did I know this morning what adventures I’d have today. But that’s what I love about hiking. Every day is so different and wonderful in its own way, even if it’s difficult.

Backing up, I started my day heading out from the Chuluota Wilderness Area parking lot. I first dropped my car at Soldiers Creek Park, my ending point, where a taxi driver then picked me up. He said it was fine to leave my car there all day while I hiked.

During our shuttle back to my starting point, I quizzed the driver on those spiders I saw yesterday. He said they are banana spiders, not poisonous, although they do bite. He said they weave ginormous webs (saw those!) and that they’re active now but disappear by fall.

I started off today at 8:30 a.m. Still late, compared to my Ice Age Trail forays. But here it’s different. At least in May. If you start really early, the temps are lower but the humidity is higher. So it’s almost better to start later.

The morning was warm and humid, yet cloudy with a little wind. So it wasn’t horrible for hiking, yet the humidity definitely slowed me down. The one scary time came when I nearly walked right into a banana spider and its web. It would have been right at mouth level! Thank goodness I saw it in the nick of time.

Time for a Road Walk

At 2 p.m. I finished the trails and popped out onto the roads. The rest of the day (until 6:30 p.m.) I was on roads around Oviedo and Winter Park, and most of those “roads” were a bike path. Unfortunately, the signage here was sparse, and I got off the trail a few times.

I used my sun umbrella here, and switched to a long-sleeved shirt to protect my arms from more sunburn. The highlight was stopping at a gas station/mini mart and purchasing a small ice cream cup AND a cup of ice to chill the water in my hydration bladder. Drinking cold vs. tepid water helps so much on hot days!

This trip I also made up a few gallons of Crystal Lite lemonade. That has worked well for me; I drink it in between the water.

So I got back to Soldiers Creek Park at 6:30 p.m., excited that my lodging for the night was just eight minutes away. I’d have an early night! But when I reached the parking lot, there were barricades across the entries/exits. I was locked in! Apparently, the county park had closed, and the taxi driver this morning didn’t realize they barricaded the exits. How would I get out?!

Since no employees were around, I called the police, who notified the sheriff. A deputy came out and said the park officials would not let the sheriff’s department (or the fire department) have keys to the barricades for emergencies. So he couldn’t help me. I said, “I’d think you could just demand keys!” and he said, “Yeah, you’d think!” Luckily, he noticed an adjacent bike path was wide enough for me to drive onto and around the barricades, allowing me to escape. All of this took 30 minutes.

Hiking is always an adventure.