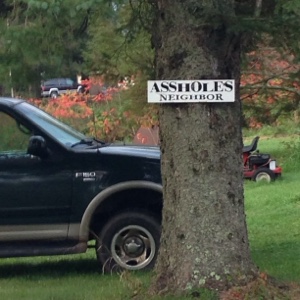 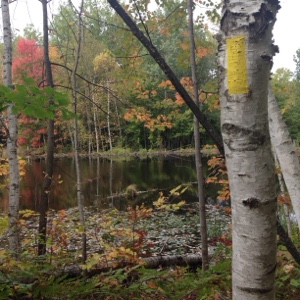 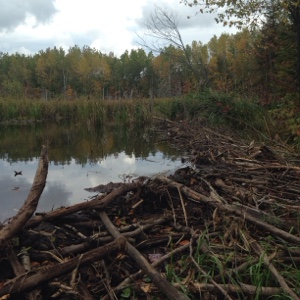 I’d heard the Blue Hills were a bit overgrown and soggy, yet beautiful. One man also said there was a phenomenal beaver dam crossing.

It had rained overnight, then again in the morning. So the trails were quite wet and flooded in many places. I’ve noticed in this northern tier that there seems to be much more beaver activity than in 2013. Many lakes and creeks have been dammed, and water levels are much, much higher than I recall from 2013.

Anyway, both the Southern and Northern Blue Hills were stunning, despite some overgrown areas that scratched me up a bit. It was a bit scary, yet thrilling, to walk over some of the beaver dams. I also saw (and heard) two beavers; I’ve never seen beavers in the wild before. I also saw a bald eagle and, best of all, a black bear sliding down a tree at the end of the day (I think I startled it).

I was able to hike on a new segment of the Northern Blue Hills, but when I went to hike Hemlock Creek I had problems. Apparently the 2014 map I have isn’t quite accurate, plus there’s an old Ice Age Trail sign on Highway F (and faded, but visible, blazes near that sign) that steered me in the wrong direction. I ended up hiking some access path to Hemlock Creek, then followed blazes back into the Northern Blue Hills! I didn’t recognize the trail at all, or the fact I was hiking backwards, even though I’d just hiked it! I started getting suspicious when the time on my watch said I should be finished with Hemlock Creek, but the trail kept going on. And then I hit one of the major beaver dams again. Thank goodness I popped out on an access path to Stout Road, where my Trail Angels could easily meet me and take me back to my car.