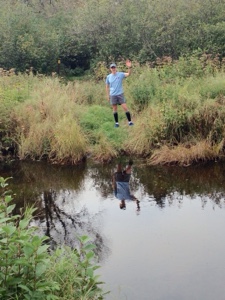 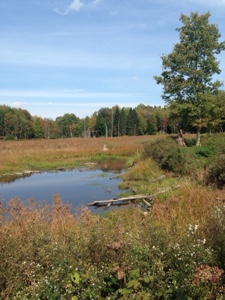 My good friend, Doug – he’s telling me to write “selfless hero” — had planned to drive up for the next five days and join me. So I rode back up with him, starting at 5:30 a.m. We arrived at Averill-Kelly by 9 a.m. and I was back on the “real” trail again.

Averill-Kelly was a bit scruffy and wet. I forgot how many rocks and roots there were, too; I couldn’t move very quickly.

Newwood had a lot of beautiful spots, but was also pretty rocky and rooty, and my feet were getting a bit battered.

Doug ran into two hikers around Camp 27. One of the two has been thru-hiking since 2012; the other is his friend, helping. The hiker told Doug, “I’m not always fully dressed, but I’m harmless.” The next time he saw the two, around Timberland Wilderness, the hiker was buck naked, except for his feet! (“He had on just his shoes and a smile,” Doug reports.)

This is interesting. Back when I did Storrs Creek, I ran into a man that roughly fits the description Doug gave of this guy, and he was wearing a speedo swimsuit with a button-down shirt that was totally unbuttoned, revealing a bare chest. Wonder if that’s the same guy?

In Timberland Wilderness we ran into volunteer Gene Simons (?), who was checking out some reported downed trees in advance of a group hike this weekend. He took our photo for a chapter newsletter, I think.

Ended the day in Wood Lake. It was just gorgeous! But I began one section at 6 p.m., and that was a mistake as I was ending when it was getting pretty dark. I did have a headlamp, but I won’t be doing that again, that’s for sure! As we were driving to our motel along Bear Avenue, Doug gave a little yell; he’d seen a bear.