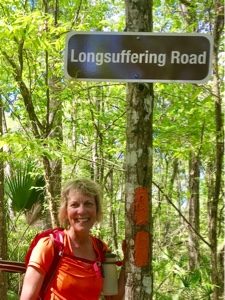 Today’s destination: Long-suffering Road. I started my hike at a T intersection in the middle of a long road walk. Interestingly, I parked in front of a home that had a fully functioning Pepsi machine out in front, near the road. Alas, I didn’t try it, as I’d just finished my coffee and it was a bit cool this morning. Not for long, though.

The temperatures quickly climbed into the 90s. Luckily, there were a lot of clouds in the morning, so my road hike wasn’t too bad. I hit the Aucilla River area (trails) a little before noon. That’s when the sun came out, but by then I was tucked in the woods.

The Aucilla River trails were wonderful, frustrating, exciting and challenging. The first few miles were scrubby and I thought the area would be a bust. But then the trail led you alongside the river for miles. It was just gorgeous. At various points there were access points to the river for cars, and several groups of people were enjoying the water. One was a group of young people swimming and drinking beer. They had thrown their beer cans all over. I hope they picked them up later, but I doubt it as I saw a lot of litter around these car-access areas.

During the last few hours on the trail, things got dicy. It looks like maybe Hurricane Matthew hit here. There were a ton of downed trees, hard-to-spot blazes, various woodsy detritus, etc. I went off-course a bit and made it to my rendezvous point with Trail Angel Linda Patton a little late. Oh well, that sometimes happens.

Linda was very sweet. She brought me ice water, a fridge magnet that says “I’d rather be hiking” and later listed my book on some hiking website.

And yes, like most Florida Trail hikers, I got a photo of myself by the Long-Suffering Road sign.

Back at my digs in the Best Western, I discovered the maids had forgotten to clean my room. It was filthy from last night’s shower/soaking, not to mention there were food crumbs (I typically eat dinner in my room), an unmade bed, etc. They said a maid didn’t show up, and offered to give me clean towels. Uh, no. My tub is filled with dirt from yesterday! Eventually someone cleaned it, but in a half-ass way.