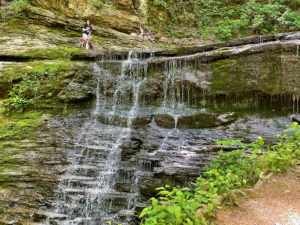 Amy and I were excited about today’s trek, which would end with us hiking from Highway 7 south on the Highland Rim section of the Natchez Trace National Scenic Trail. But, as always, a recap of last night.

Ed and I stayed at Fall Hollow eight years ago during our Natchez Trace thru-bike. We’d rented one of their two motel rooms, and it was clean and comfy. The place also rents cabins and campground space, and Amy and I decided to rent a camping spot. The owner (not sure if it’s the same person) told me our $10 campground rental included the use of a personal bathroom with a shower, sink and toilet. Score!

Well, there were four of these bathroom set-ups, but they were pretty dirty. We enjoyed our showers nevertheless, plus ate under a pavilion with several picnic tables. I also was able to charge my laptop with their power. But the bathroom lights kept us up a lot (we tented right next to the bathrooms). And in the morning, the bathrooms were even dirtier, with overflowing trash cans. Ugh. So it was disappointing.

Our morning went pretty well, as there were a number of interesting pull-offs, including the pretty waterfall Jackson Falls, sections of the Old Trace (which we hiked) and Baker’s Bluff, a scenic overlook. My tendinitis wasn’t too bad. Amy’s is gone – yay!

We arrived at Gordon House, a popular ferry stop on the Trace back in the day, around 1:30. After touring the area, we dropped one car here and drove to Highway 7, which is one of several trailheads along the Natchez Trace National Scenic Trail. Specifically, our final section: Highland Rim.

A sign said it was 8 miles (12.9 km) back to our car. But that corresponds exactly to the parkway mileage. Since hiking trails twist and turn much more than the parkway, we’d surely be hiking more than that. But how more was anyone’s guess. But there was nothing we could do except start walking.

The trail was pretty well marked for the most part. But it kept meandering out of the woods and leading us in tall grasses that paralleled the parkway. And in these grasses, the trail was hard to discern. We kept losing it and finding it again. We were also nervous about hiking in high grasses (sometimes above our knees) because it’s tick season. And while we’ve been lucky so far and haven’t encountered any, you never know.

The woodsy sections alternated being easy and enjoyable to being on the tougher side. This trail is open to equestrian traffic, and it often seemed that it was mainly used by riders. There were muddy spots with big divots from horse hooves, for example, plus horse apples. And the trail got steep in parts; some folks told us it’s called Highland Rim because this is like a Continental Divide for the southeast.

And, as I suspected, it ended up being longer than billed. I’m not sure how much farther we walked, but a guess is maybe another 2 miles (3.2 km). 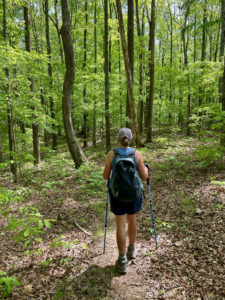 We decided to camp at Gordon House, where there’s a restroom. There’s a biker campground at the southern end of the Highland Rim section, where we ended today, but it’s pretty overgrown and scruffy. And there are no restrooms! Amy and I got back around 7 p.m. – a long day. We set up camp quickly and are now decompressing.

Oh, I must mention the black locust trees! We smelled amazing orange scents all day, and eventually learned it was from the flowering black locust trees. Pretty amazing. We also saw more cool wildflowers and lots of turkeys.

The other day, I saw a crow dive-bombing a hawk, who apparently was too close to the crow’s nest with babies (I’m guessing). There is so much to see out in nature! LOVE.

I really love my Vivobarefoot water shoes. Get yours here!

To help ward off ticks, I sometimes wear bug pantst. And I always pretreat my clothes and backpack with permethrin. Get your bug pants and permethrin here!