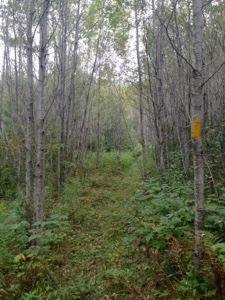 Well, this day is one for the record books! My older sister, Sue, came up to help me today. I started just outside the Kettlebowl, then quickly entered. Two years ago every thru-hiker I met had gotten lost in the Kettlebowl. The Langlade County Chapter has done an amazing job re-marking its trails. There’s no way you can get lost on any of them. Kettlebowl was pretty, although it began raining (pouring, actually) near the end, which wasn’t fun.

Next was Lumbercamp. Before my 2013 thru-hike, I’d read all about the Hillbilly Hilton, an old lumber camp root cellar that’s now a rustic retreat or shelter from the storm. I really wanted to see it, but never spotted it. I was told it was kind of hard to see, but definitely easier to spot heading east-west. I was bound and determined to find the Hillbilly Hilton this time around. Rats — I never did. It was still raining pretty heavily then, and I was watching my footing. Even though I tried to keep an eye out for it — I thought maybe I could take shelter there — I never did see it.

The drama came after the rain stopped. Sue and I miscommunicated about where we’d meet up next (this was at 2 p.m.). I’d also given her my cell phone to recharge. To make a long story short, we never found each other for the rest of the day. I continued on through Lumbercamp and Old Railroad until the sun went down and I had to get off the trail. I hiked up to a home and a woman helped me reconnect with Sue, who had just called 911 and got the sheriff’s department on alert to look for me. We were finally reunited about 8:30 or 9 p.m. I guess this means tomorrow will be a good day!