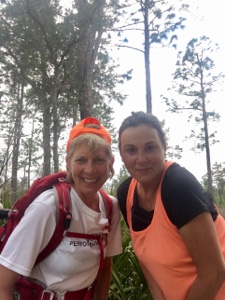 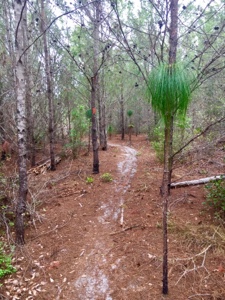 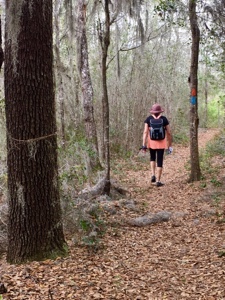 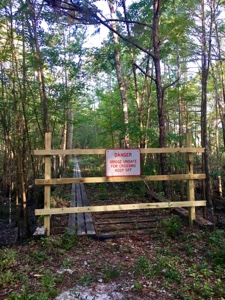 Lucky me on my trek heading out from Palatka. Today was another cool (70s) and cloudy day on the trail. Not that I don’t love the sun, but sometimes it’s nice to hike in cool, cloudy weather.

The first part of my hike was along the Palatka-Lake Butler State Trail, a rail-trail. As soon as I started, I came across a bridge over a creek that was blocked off with a sign saying the bridge was closed because it was too dangerous. Luckily I had read Late Start’s trail journal. She said she deemed it safe enough. And definitely a better option than wading through the fairly-deep creek below, or walking along the busy highway that had no shoulder. Sure enough, the bridge was plenty sturdy.

There was a bit of road walking after that along sandy trail, then I was led into the woods for several miles. It was very lovely.

Judy Joining Me From Palatka

Judy was joining me on and off during these segments.

The last half of the day was along a paved road and then a sandy road around the Christian Camp and Gold Head Branch State Park. At one point, some dogs were threatening me. But then a guy drove up in his pick-up and blocked the dogs from me until I got past. This was the second time I’ve been so saved here in Florida.

During this trip I’ve been plagued with iPhone email issues. For example, my mail app got accidentally deleted during my fourth day on the trail. And even though I reinstalled it, it wouldn’t send any emails (although it received them). Today, my laptop wasn’t working. And as I work at night in my motels, this was a serious issue. I think I finally have both fixed. I sure hope so!