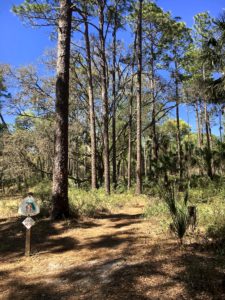 I’m starting my second chunk of the Florida Trail at Clearwater Lake. But this isn’t where I ended in January. Back then, I stopped my hike at Prairie Lakes, with an eastern swing through the Orlando suburbs up next.
But I decided to skip ahead, as my husband is supposed to go to Orlando for a work event in May. I figure I’ll tag along with him then and hike the Orlando area while he’s at his conference. So that’s why I decided to start here at the rec area in the Ocala National Forest. Trail Angel Tammy helped me with my shuttle.

I was so excited to be back on the trail, but the day didn’t start off too well. I had booked a $50 one-way ticket from O’Hare to Orlando. The flight left at 6:30 a.m. But in my excitement at nabbing a low fare, I didn’t stop to think that a 6:30 a.m. flight out of Chicago meant I’d need to leave home at 1:45 a.m.
I tried sleeping on the bus, but couldn’t do it. This particular bus was very popular, with businesspeople traveling for work and kids on spring break. So it kept stopping in various cities to pick up people. Every time the bus stopped, the lights went on and there was a big hullabaloo.
Then the flight was 90 minutes late, and I was delayed another 30 minutes by the rental car people and one wrong turn on the Interstate. So I started my 13.8-mile hike at Clearwater Lake at 3 p.m., not 1 p.m. as I’d planned. And I had to bust my butt to get it done before it got dark.
I did, thankfully, but I couldn’t soak up as much of the atmosphere as I’d like. But I’ve got 13 more days to hike, and I will make the most of every moment.